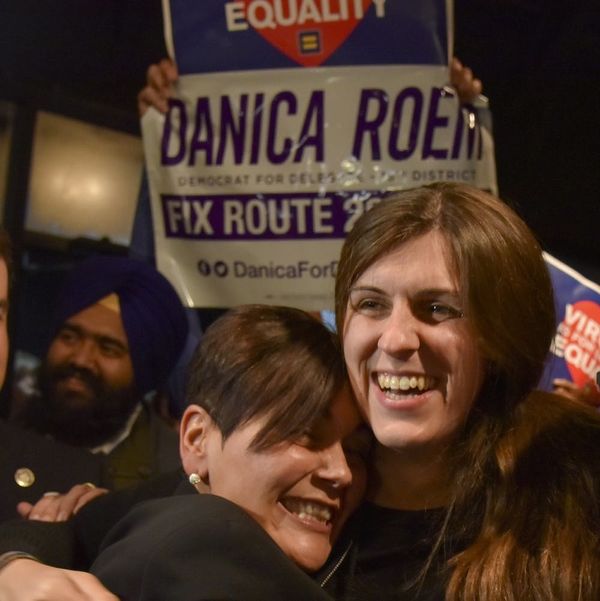 Although 2017 isn’t a full mid-term election year, there were some hot tickets on yesterday’s ballots. One of the races of greatest interest to people across the country was that of trans activist and journalist Danica Roem against incumbent Bob Marshall — the author of Virginia’s “bathroom bill” and self-described “Chief Homophobe” of the state. The two battled it out for a seat in Virginia’s House of Representatives, and Roem’s win is not only historic for the state and the nation, but it’s proof that love trumps hate.

Although Roem’s platform focused on transportation, economic development, and education, it’s her status as an out trans woman that made headlines. Her running and subsequent election have made her the first openly trans woman to be elected to any political position in her home state of Virginia. And that win is important in the context of who she beat.

Marshall has served in the Virginia state legislature for 26 years and has been a fierce opponent of gender equality in the state. He was the first to push against marriage equality in 2006, and tried to get gay people banned from serving in the military as recently as 2010. But it was his now infamous “bathroom bill” that had him making headlines this year.

Marshall’s “Physical Privacy Act,” tabled in January, would have banned gender non-conforming individuals from entering a “restroom, changing facility or private area designated for members of the opposite sex” in any governmental building. The bill also had an added clause that would force school officials to out children who asked to be identified by a different gender than they were assigned at birth. Thankfully, the bill was swiftly destroyed by the Republicans in the state.

In the wake of her win, some are calling Roem “face of the Democrats’ revival” following the party’s crushing defeat in last year’s federal election. And although she’s making waves, she’s not the only trans woman to have won last night.

At the municipal level, Minnesotan Andrea Jenkins was elected to the Minneapolis City Council, making her both the state’s first out trans elected official and the first trans person of color ever elected to office in the nation. Jenkins has a strong background in municipal politics, having served as her district’s policy aide to the outgoing Council Vice President Elizabeth Glidden. Jenkins is also an activist with a background in economic development and trans advocacy, like Roem.

Ms Roem is not the first openly transgender state lawmaker in the United States, however. Back in 2012, Stacie Laughton won a seat in New Hampshire’s legislature, but she resigned before taking office after it was reported that she had been convicted of fraud while still living under her birth name.

Althea Garrison won a seat in the Massachusetts legislature back in 1992, but at the time her transgender status was not known by the public. She was outed by a conservative newspaper regarding her previous closeted life as a man.

What do you think about the surprising wins during yesterday’s mini-midterms? Tell us @BritandCo!

Kat Armstrong
Kat has been a writer, social media maven and mom for longer than she's willing to admit. She's also spent time in front of and behind the camera, interviewing celebs, politicians and acting as a producer for fashion and artistic photography shoots. When she isn't writing for various orgs and publications, she's hanging with her kids, husband and French Bulldog, Peter, in Toronto, Canada.
Gender
Politics
Gender LGBTQ Politics transgender