How to Deal If Your S.O. Is in a Different Hogwarts House Than You 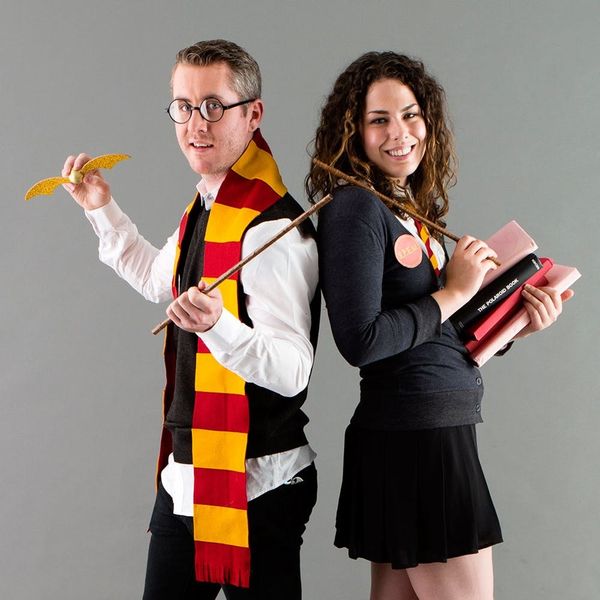 While muggles are re-reading Harry Potter or planning their next Harry Potter-themed trip, us real wizards are busy brewing potions, practicing spells, and trying to avoid Moaning Myrtle. Life at Hogwarts is filled with wizarding magic, and another kind of magic also fills the halls: young love. Save for the Forbidden Forest, Hogwarts is a pretty great place to fall in love — unless, of course, you fall for a wizard in a different house than your own. Even if you can’t actually live in Hogwarts and are just navigating dating a fellow Potterhead who’s not in your house, whether that be Hufflepuff or (gasp!) Slytherin, these tips will still help you avoid wanting to jinx each other.

1. Learn about their house. The key in any relationship is to capitalize on similarities and learn about differences. You’re probably an expert on your own house. You’ve learned about its history, heroes, and symbols, whether you’re deep-diving into Rowena Ravenclaw’s life or Gryffindor alums’ famous heroic acts. While you’ve got a lot to be proud of, make like Hermione and ask your boo a thing or two about their house, like how Hufflepuff adopted the badger as its mascot. The more you learn about what makes you different, the more you’ll appreciate the things you have in common.

2. Have fun with competition. Keeping Hogwarts ever at heart is a must when dating someone in a different house. However, that doesn’t mean that a little friendly competition won’t make for a flirtatious rivalry. Maybe they’re a Ravenclaw and got house points for doing well on a test. If you’re a Gryffindor, match their intellectual prowess with dominance on the Quidditch pitch.

3. Think about where your true loyalties lie. Sure, your houses compete for the House Cup and in regular Quidditch matches. However, the true entity that you should be loyal to is Hogwarts itself. After all, in events like the Triwizard Tournament, Hogwarts competes against other wizarding academies on an international scale. Stay true to your house, but know that you both share a home.

4. Know that opposites sometimes attract. You might think that a Slytherin and Gryffindor would never be seen dating each other — lest Snape turn over in his grave. However, keep in mind that every good relationship has a healthy amount of balance. For example, an introverted Ravenclaw might be well-balanced by a quirky Hufflepuff. Embrace your differences, and know that they’re to your advantage.

5. Remember to respect the prefects. Dating someone in a different house can be a logistical challenge. Being sorted into different houses means literally living in different parts of the Hogwarts castle. And while sneaking out for a late-night rendezvous with your boo sounds tempting, remember to respect the authority of the prefects and stay in your own quarters (unless you get your hands on the Marauders Map, of course).

Gabrielle Gresge
Gabrielle Gresge is a Chicago native and journalism student at the University of Missouri. While not chasing deadlines, she enjoys giving campus tours, exploring her new home, and missing her old one. She loves to write about these experiences in her own handwriting at gabriellegresge.wordpress.com.
Dating
Relationships
Dating Halloween Harry Potter Relationship Advice
More From Relationships