Disney Lovers, These Invitations Are a Must Send 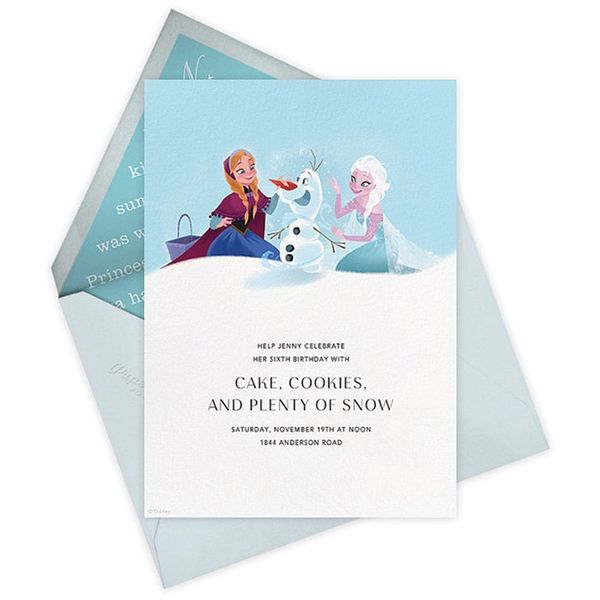 The leadup to the arrival of your newborn more than likely feels endless — from the nursery prep and the baby name debates to a shower or two squeezed in between. Once your mini-me arrives it probably feels like time flies by thanks to the rapid fire that is rolling over, scooting, giggles, solid meals, walking and first words and before you know it you’re celebrating their fifth birthday. As all of those first moment memories are happening, your child is more than likely establishing their lifelong bond with all things Disney (aka they’re gonna want at least one Mouse-House + co themed party before they hit 10 years old). To make them feel like the princess/prince they are, you’ve gotta make sure to set the magical party’s tone right from the getgo, and that’s exactly what Paperless Post’s latest collab collection is setting into motion.

The Internet card company that teamed up with J.Crew for a stunning stationery collection has gone bigger and more classic for its latest collab. Inspired by kids’ love affair with their favorite Disney books, Paperless Post x Disney was brought to life. In this first collection of Disney birthday invitations from the customizable online card outlet, parents (and their children) have the opportunity to decide between 50 different birthday invites to customize, featuring recognizable princesses Anna + Elsa, Snow White, Ariel and more, plus iconic classic characters like Dumbo, Peter Pan and Winnie the Pooh. And since they’re customizable, adults can totally send ’em for their own celebration. Don’t judge us, okay?

The dreamy + gorgeously drawn cards were designed after Paperless Post dug through the Disney Publishing archives for original hand-painted illustrations to find inspo that would capture the feelings all things Disney invokes: “magic, nostalgia and something special to hold on to.” They must have had Jiminy Cricket on their team, because mission accomplished.

From the looks of this first preview in a hopefully endless partnership, we already have some ideas for future invites in the series (ahem, where is Remy from Ratatouille for the little chef party?!). Nevertheless, we’ve got our fingers crossed that a couple of these Disney invites land in our inbox in the near future. Who can resist a Disney ball, after all? ;)

Will you be sending out a Disney Paperless Post invitation for your kid’s next birthday party? Let us know which one in the comments.