3 Simple Ways to Create a Chic Mobile for Your Nursery 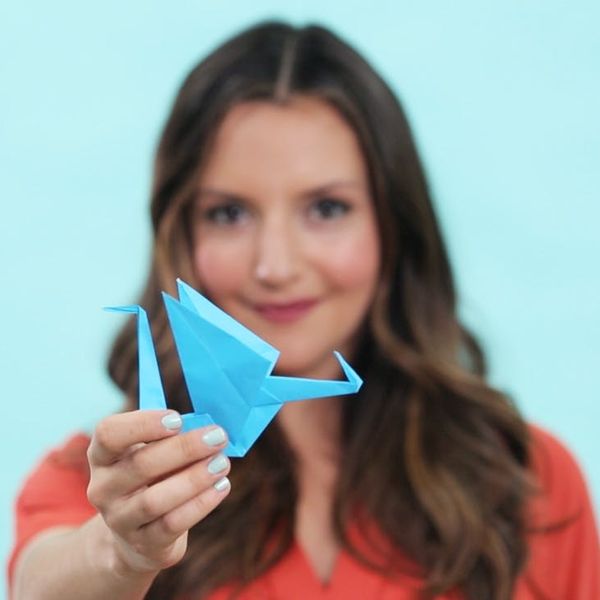 As avid Brit + Co readers know, our very own founder Brit Morin is expecting her own bundle of joy this fall! To prep, we’re all scouring the web for most creative quilts, onesies and nursery designs. And, of course, we’re DIY-ing our little hearts out as well. We’ve teamed up with JOHNSON’S® Baby to show you how to create three different mobiles using origami storks!

But why storks? Well, time for a little history lesson. There’s a Japanese legend that folding 1,000 origami cranes will result in a wish granted and a hope fulfilled. To put a baby spin on the legend, we’ve created origami storks in place of cranes! The idea was adapted from JOHNSON’S® Baby brand, who created a beautiful, 1,000-piece origami stork mobile of their own to symbolize how they have delivered on their promise to always listen to moms and create the safest possible products for moms and babies :) In fact, JOHNSON’S® Baby scientists and their families came together to write down their promises, and created the mobile to beautifully express this promise to moms everywhere. See this labor of love right here and share your promises at #PromiseToBaby.

We got on board with the beauty of these storks and created three different mobiles designed to fit the personality of any nursery.

First things first, you need to learn how to fold an origami stork! The steps below look like a lot, but we promise it’ll be quick once you get the hang of it. We should know — we made over 300 storks to create the three mobiles you see above!

With the colored side of the paper facing the table, fold up one edge creasing the paper in the center. Repeat this from right to left.

Open up the paper, and then push each side in, reverse folding the right and left creases. You should have a square shape with two flaps on each side.

With the open end pointing down, fold the top flap in towards the center. Repeat this on the other side. Then fold the top triangle down and make a nice crease. Fold in the flaps on the back side going in the opposite direction.

Unfold the flaps and folded triangle. Lift up the top flap and reverse fold it along the crease at the top (where you folded the top triangle down). Draw in the sides reverse folding them as well.

Flip the paper over and do the same thing to the other side. You will wind up with a long diamond.

Now you’ve got your bird base. Turn your bird base to the side and you’ll see that one end is split and the other end is not. Rotate the base so that the split end is on your left side.

Fold the bottom edge of the top flap along the center. Do the same thing with the top edge.

Lift up your bird base and swing the back flap on the right side over to the left..

You should have three flaps on the left side — two look the same and then there is a third one in between that is smaller.

Take the top flap and fold it to the right. Then fold it back and up towards the left. Do the same thing with the flap on the other side so that it matches.

Now take the bottom flaps and fold them up on each side towards the center line.

On the other end, make an inside reverse fold with a small piece at the tip of the tail.

Now, let’s turn this stork into many storks… and then turn those storks into decorative nursery mobiles!

Instructions: 1. Spray paint your embroidery hoop white, or any color you like. 2. Organize your origami paper in an ombre color pattern. Make storks! 3. Use a needle and thread to string the storks and hang them on the hoop. 4. Hang each stork a little lower than the one before it, descending a spiral shape.

The first thing we did was spray paint our embroidery hoop white.

Organize your origami paper in an ombre color pattern. Make storks! Then, use a needle and thread to string the storks and hang them on the hoop.

Hang each stork a little lower than the one before it, descending a spiral shape. How pretty is that?

Instructions: 1. Spray paint your branch gold, or any color you like. 2. Make storks using gray and white origami paper. 3. Use a needle and gold thread to string the storks and hang them on the branch at different heights.

Spray paint your branch gold, or any color you like. For paper, we chose gray and white to keep things minimalist and chic.

Make those storks! Then Use a needle and gold thread to string the storks. Hang them on the branch at different heights and you’re done!

Instructions: 1. Pop open your lantern! 2. Make storks using paper of our choice. 3. Use a needle and gold thread to string the storks together to create tassels. 4. Attach the tassels to each corner of your lantern. 5. Turn on the lantern and turn down the lights ;)

Pop open your lantern! For paper colors, we chose a mix of colors and one pattern.

Make your storks. Then string them together to create tassels. Hang them on each corner of your lantern.

Turn on the lantern and turn down the lights. Misty’s little Elijah certainly approves! :)

Who knew storks were so versatile!?

What other unusual mobiles have you seen or made? Which one of the ones we made is your favorite? Talk to us in the comments below.

Anjelika Temple
As Co-Founder and Chief Creative Officer of Brit + Co, Anjelika Temple brings her voracious consumption of all things creative and colorful to DIY projects, geeky gadgetry finds and more. When she's not DIY-ing her heart out, you'll find her throwing dinner parties with friends or adventuring with her husband David, their daughters Anokhi and Indira, and their silly dog Turkey.
Baby Names
Sponsored
More From Baby Names