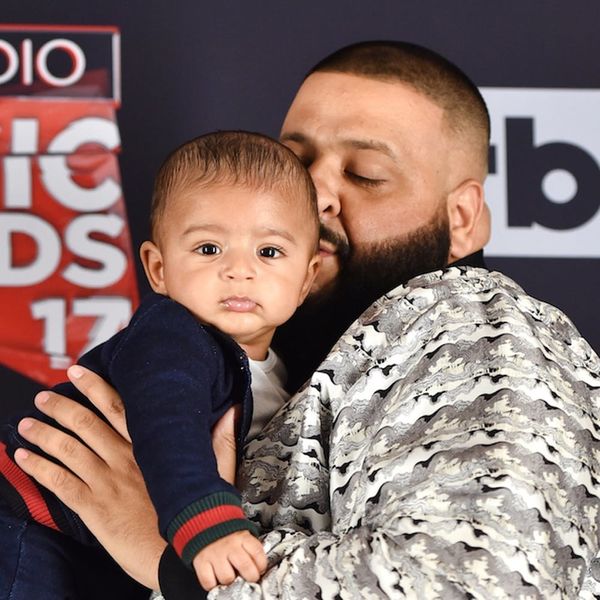 DJ Khaled has always been an infectiously enthusiastic guy, and it’s made him not only a go-to producer for some of hip-hop’s biggest names since early aughts, but a bona fide social media star since his “keys to success” became a Snapchat staple back in 2015.

Lately, all of Khaled’s enthusiasm is directed at none other than his baby son Asahd, who was born last fall and has been dominating the producer’s Snapchat and Instagram accounts ever since. Khaled is so insanely smitten with Asahd (who, we should add, is *insanely* adorable) that he takes him to red carpets, awards shows, and press conferences, and will even give him credit him as executive producer on his upcoming album, Grateful.

@asahdkhaled jus got done listening to #GRATEFUL to see where we at wit the album .. and here's my son reaction after hearing what we have so far ... I love you @asahdkhaled ! FAN LUV THIS MY BIGGEST ALBUM ITS ALL IN GODS HANDS AND @asahdkhaled HANDS!! #GRATEFUL IS IN GOOD HANDS!! @wethebestmusic @epicrecords @rocnation 🙏🏽🔑🙏🏽

It’s not hard to squee at the sweet bond these two share. Every day, Khaled tells Asahd he’s his best friend. An icon. How much he loves him. And Asahd inevitably breaks out into a HUGE and adorable smile. Eee!

I love you @asahdkhaled #GRATEFUL

I love you @asahdkhaled ! I played this song to you everyday when u was in mommy belly 🙏🏽🔑🙏🏽you can see where my son is like I heard this song before 🙏🏽

And obviously this baby is *balling* already. Look at this bling!

I love you so much!! @asahdkhaled #GRATEFUL #SHINING

But even the sweetest things in life aren’t immune to the meme-making power of the internet, and lately, fans are turning it around to show how Asahd must feel with the non-stop, in-your-face attention. Gotta hear both sides!

It’s not likely that Asahd will want to be the star of his mega-famous dad’s social media forever, though TBH, we’re holding out for the rebellious teen Asahd years. Despite the over-saturation and potential implications of making your very young child’s life so public, we can’t help but love how sincerely affectionate and attentive DJ Khaled is as a dad.

In the meantime, we’re here for any and all Daddy/Asahd time.

Everyday me and my son look in the mirror and I SAY ASAHD and point to him to show him how GREAT HE IS !! And I tell him how much daddy loves him!!!!!! Follow my son @asahdkhaled now!! #WeTheBest 🙏🏽🔑🙏🏽

Are you a fan of Asahd Khaled? Let us know over @BritandCo!