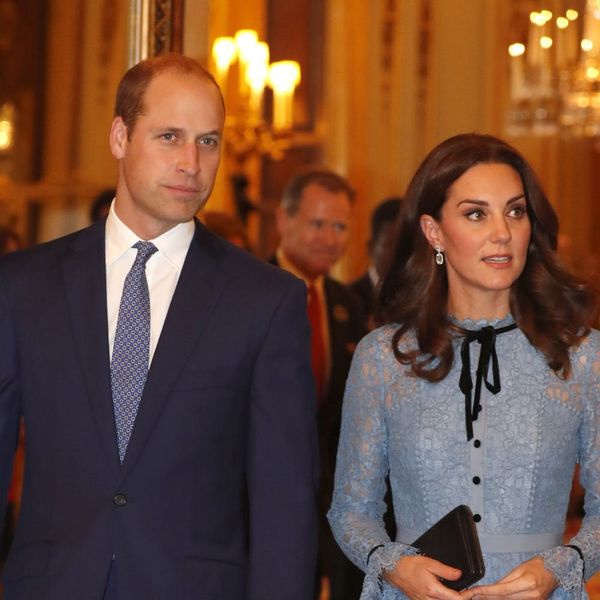 We’ve known that Kate Middleton is again dealing with the effects of hyperemesis gravidarum ever since the royal family revealed that she is expecting her third child. At the time, she had to cancel a visit to the Hornsey Road Children’s Centre because of the condition. Now, a little over a month later, the Duchess of Cambridge has made her first official appearance since the pregnancy announcement — and naturally, she looked stunning.

On Tuesday, Middleton joined Prince William and Prince Harry at Buckingham Palace for a reception to celebrate World Mental Health Day. In addition to honoring those working in the mental health field, the royals highlighted their Heads Together campaign, which aims to reduce the stigma surrounding mental health issues.

Middleton (who looked stunning in a light blue Temperley London dress) was there to recognize the efforts of others, but she drew plenty of attention herself too, from people who were both curious about and concerned for her physical health. According to People, an aide spoke to reporters and put aside any worries, saying, “The Duchess’s condition is improving but she is still suffering from hyperemesis gravidarum. She is delighted to be able to be here tonight.”

The event was her first official engagement since late August, when she accompanied her husband and brother-in-law as they marked the 20th anniversary of the death of their mother, Princess Diana. Days later, Kensington Palace announced that she was pregnant and dealing with hyperemesis gravidarum, which forced her to miss four-year-old Prince George’s first day of school.

We’re glad to see she was feeling well enough for today’s event!

Do you know anyone who has dealt with hyperemesis gravidarum? Let us know @BritandCo!