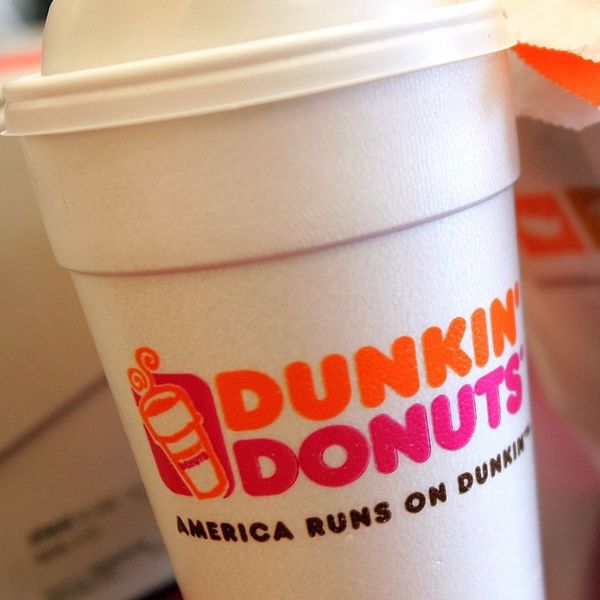 Ah, Dunkin’ Donuts: Our go-to brand for a cup of joe, a sweet breakfast treat, and… beer? That’s right! Just days after Taco Bell dropped its first-ever signature brew for customers at its Huntington Beach location, Dunkin’ Donuts has announced its very own new alcoholic addition in the form of a craft beer to lighten things up for today’s winter solstice — AKA the darkest day of the year.

The donut chain collabed with Worchester, Massachusetts-based Wormtown Brewery to create an aptly-named DDark Roasted Brew to rival the pumpkin spice ale it released in North Carolina this fall. But this isn’t just any brew — the boozy treat is infused with — you guessed it! — Dunkin’s Dark Roast coffee.

Cheers to the official start of winter and @dunkindonuts new DDark Roasted Brew! Stop by the taproom today for your first taste. #DunkinDarker

According to a press release, the DDark Roasted Brew is a “…decadent stout-style beer,” which “features full-roasted coffee flavor reminiscent of freshly-ground beans with a creamy mouthfeel.” Mmm!

We’re bubbling over with excitement for the first pour of @dunkindonuts DDark Roasted Brew tomorrow at 11:28am! Come party with us as we get #DunkinDarker

The brewery choice is a fitting one, considering that the New England town is home to one of the very first Dunkin’ Donuts restaurants. What’s more, Wormtown is also donating $11,500 to a local food bank in celebration of the collab.

“We’re confident this beer is going to be an instant favorite for New Englanders this holiday season,” said the head brewer at Wormtown, Scott Drake. “The fact that we’re able to give back to Worcester-area families through this partnership just makes it that much better.”

If you’re looking to cozy up with a pint of Dunkin’-spiked beer tonight, you’d better act fast, however — the beer, available exclusively at Wormtown Brewery, is in limited edition and there’s no word on how long it’ll be available at the East Coast hot spot.

Anyone up for a road trip?

What’re your thoughts on coffee-infused beer? Tweet us @BritandCo!