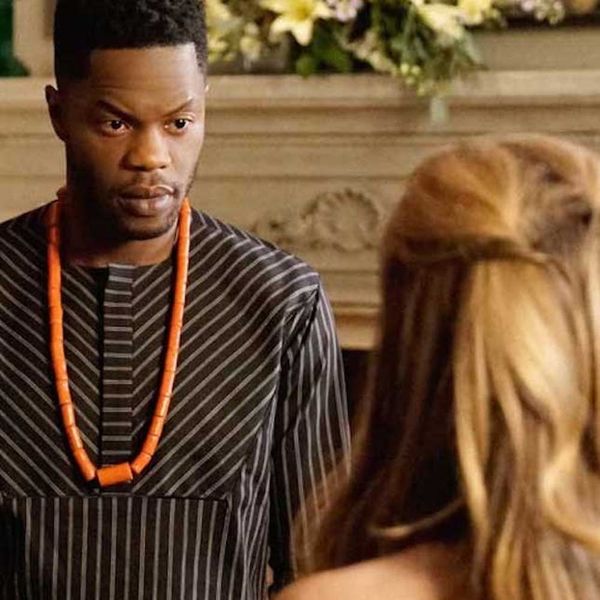 Some weeks, Dynasty is one of my favorite new shows. Its over-the-top plotlines and zingers are played to perfection by the cast. But other weeks, it just doesn’t quite strike the right chord. Individual story lines are good, but the episode doesn’t gel. Such is the case with “A Line from the Past,” in which Alexis’ schemes get convoluted to the point of not making sense.

This week, flashbacks show how hard Alexis and Blake worked to keep teenage Fallon and teenage Jeff Colby apart. It turns out that Jeff is actually a Carrington and that’s why they couldn’t be together. Um, what? So, Blake is Jeff’s father? Is that what we’re supposed to believe?

We already have one long-lost Carrington kid running around out there — do we really need two? I don’t actually believe any of this. I think this is some game Alexis is playing; I just haven’t figured out what her endgame is.

Meanwhile, Cristal tells Fallon about how Carrington Atlantic is responsible for Michael’s father’s illness, and Fallon says they have to force her dad to do the right thing. I love any time Cristal and Fallon join forces. Unfortunately, Blake nearly always bests them, and this time is no exception.

After Fallon and Cristal get their hands on the deposition recording, Carrington Atlantic’s involvement in the Clarke County illnesses goes public anyway, thanks to Alexis, which forces Blake’s hand. But he isn’t going to let the ladies beat him at his own game, so he holds a press conference where he announces a new initiative to have greener, safer energy, which will be spearheaded by Fallon — after Carrington Atlantic absorbs Morell Corp. And when Fallon takes over as COO, Cristal is stepping down to “focus on family.”

Neither of the ladies is super happy about this, though Cristal definitely gets the fuzzier end of the lollipop. So in a tiny act of rebellion, Cristal goes to Michael on her last night as COO and hires him, saying he can do more good from the inside. So Michael works for Carrington Atlantic now.

Finally, Steven manages to track down a man claiming to be Adam Carrington. That’s basically it with that story line. Sam briefly thinks Steven is having an affair but decides just to trust his partner after some kind words from Anders, who, it turns out, has a daughter in Australia. It’s not a great episode when one of the best scenes is Anders trying to muster up the courage to call his daughter, you guys.

There were some excellent jokes, especially the throwaway line about the falconers being brought in to help with the gopher problem, but as a whole, the episode felt really unfocused. There are only two Dynasty episodes left this season, so let’s hope this show can stick the landing.