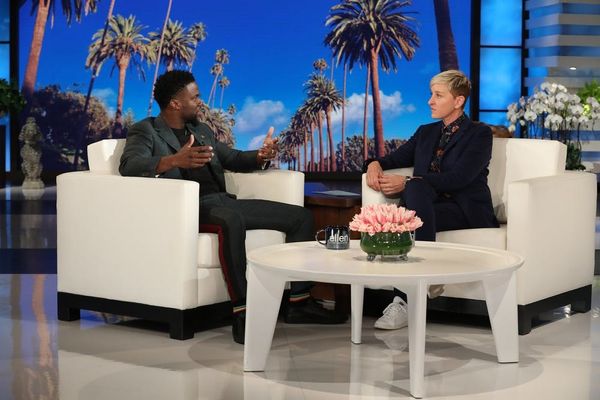 The 2019 Oscars are still without a host after Kevin Hart recently stepped down amid backlash over old homophobic tweets. But the comedian now says he is “evaluating” his decision after Ellen DeGeneres defended him on a recent episode of her talk show.

“I called [The Academy], I said, ‘Kevin’s on [my show], I have no idea if he wants to come back and host, but what are your thoughts?’” DeGeneres told Hart on the Friday, January 4, episode. “And they were like, ‘Oh my God, we want him to host. We feel like maybe he misunderstood or it was handled wrong or maybe we said the wrong thing but we want him to host. Whatever we can do, we would be thrilled. And he should host the Oscars.'”

As the audience applauded, Hart said that he regretted the homophobic remarks he tweeted in the past. He also said that he felt as though “quote-unquote trolls,” who found and shared the since-deleted offensive tweets from 2008, were trying to sabotage his career.

Hart was initially announced as the host for the upcoming Oscars in early December. Days later, screengrabs of his past offensive tweets circulated online, and the comedian said in an Instagram video that the Academy had given him an ultimatum to apologize or be removed as host. He declined to apologize because, as he said, he felt he had already done so in the past. Shortly after, Hart did tweet an apology to the LGBTQ+ community and stepped down as host.

While some prominent members of the LGBTQ+ community, such as comedian Billy Eichner, accepted Hart’s apology at the time, his Friday appearance on Ellen was not satisfactory to everyone.

“It wasn’t a mob of people out to get Kevin Hart,” BuzzFeed film reporter Adam B. Vary, who initially brought up Hart’s old posts, tweeted on Friday, January 4. “It was a group of people who wanted to understand Hart’s thinking about those hurtful tweets and his stand-up jokes.”

During the interview, DeGeneres said that she truly believed Hart had taken responsibility for his past actions and understood why they were hurtful to so many.

“As a gay person, I am sensitive to all of that,” she said. “You’ve already expressed that it’s not being educated on the subject, not realizing how dangerous those words are, not realizing how many kids are killed for being gay or beaten up every day. You have grown, you have apologized, you are apologizing again right now. You’ve done it.”

Following the interview, DeGeneres tweeted that she believes in second chances and forgiveness. Hart posted on Instagram that it was the most “honest and authentic” interview he had ever done.

“Leaving here, I promise you I’m evaluating this conversation,” Hart told DeGeneres. “This is a conversation I needed to have, I’m glad I had it here. I’m glad it’s as authentic and real as I could’ve hoped it would be.”

What do you think of Ellen and Kevin’s interview? Let us know @BritandCo.