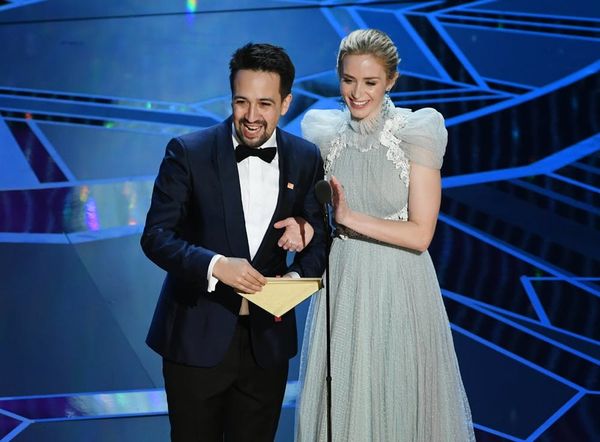 Fans who can’t wait to see Emily Blunt and Lin-Manuel Miranda in Mary Poppins Returns can get a sneak peek at their adorable chemistry thanks to a quick video Disney posted to Instagram, which features the costars singing Aladdin‘s “A Whole New World.”

“I can show you the world,” Blunt sings to Miranda as the two take a break from promoting Mary Poppins Returns, the upcoming sequel to the 1964 classic. As she continues, he jumps in to join her, crooning, “Shining, shimmering, splendid.”

When they get to the line “Tell me, princess,” Blunt pauses to tell Miranda that he’s the princess, to which he replies, “Oh, thank you.”

The actors weren’t done there, though. They also performed a cheeky little duet of “Moments in the Woods,” from the musical Into the Woods. (Blunt appeared in the film version in 2014.)

Into The Woods is a Disney film, therefore this Sondheim officially counts as a Disney tune... #Linstagram #MaryPoppinsReturns

Lin then gave fans a solo performance of a medley of songs from Aladdin, Beauty and the Beast, The Little Mermaid, and Mulan.

He also acknowledged Disney’s infamous villains with a mix of “Poor Unfortunate Souls,” “Cruella de Vil,” “Hellfire,” and “Be Prepared.”

The posts were part of an Instagram takeover from the Hamilton creator. He also shared a look at the elaborate sets, an incredibly apt gift from the writer of Zootopia and Moana, a trip to Buckingham Palace (yes, that is Prince Harry’s head), famous friends including Tyra Banks, and plenty of silly shenanigans.

Did I take a picture? Nope. #Linstagram #marypoppinsreturns

Mary Poppins Returns is set to be released this Christmas.

Are you excited to see Emily Blunt and Lin Manuel-Miranda together in Mary Poppins Returns? Let us know @BritandCo!