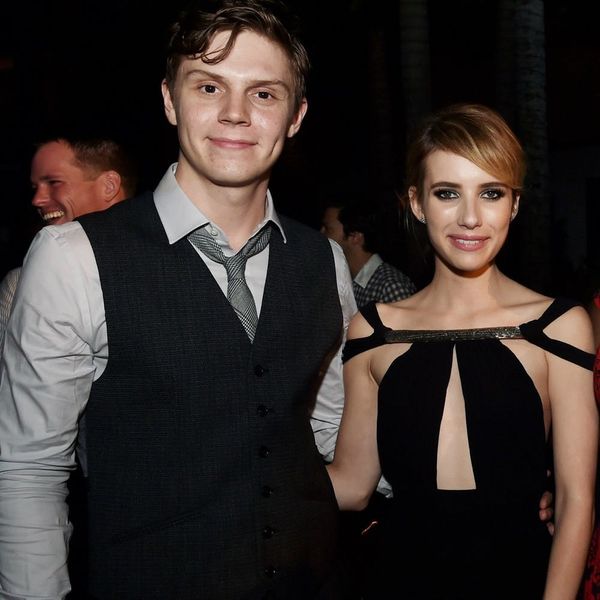 Emma Roberts and Evan Peters: Where do we begin? For the past four years, these two have been breaking up only to make up in a cycle that puts Rob Kardashian and Blac Chyna’s to shame.

Kind of. By August, they were right back on, and they lasted another nine months before calling it quits once more.

But wait! There’s more! According to US Weekly, who has confirmed with multiple sources, this crazy couple is not only back together, the wedding is back on. Say what!?

“She’s been wearing her ring on set,” one source says. “Everyone on set knows.”

Though neither star has confirmed or denied the buzz, their social media accounts certainly seem to align with the news: Posted just five days ago, Evan shared a snap of his sweetheart, simply writing, “This girl.”

Evan wasn’t visible in Emma’s own shot, but her “Happy Thanksgiving” post was a nod to her man, tagging him in the photo cred and clueing us in to the fact that at the very least, they spent the holidays together (that, and the fan photos they took with an AHS fan together in Providence, Massachusetts).

Hmmm. We’re still holding out for the official word, but it’s obvious that these two are crazy in love. We can only hope they’ve done enough growing up by now to handle things differently this time around!

Do you think Emma and Evan can make it last? Share with us @BritandCo.

Nicole Briese
Nicole is the weekend editor for Brit + Co who loves bringing you all the latest buzz. When she's not busy typing away into the wee hours, you can usually find her canoodling with her fur babies, rooting around in a bookstore, or rocking out at a concert of some sort (Guns N' Roses forever!). Check out all her latest musings and past work at nicolebjean.com.
Celebrity Couples
Celebrity News
Celebrity Couples Engagement love
More From Celebrity News