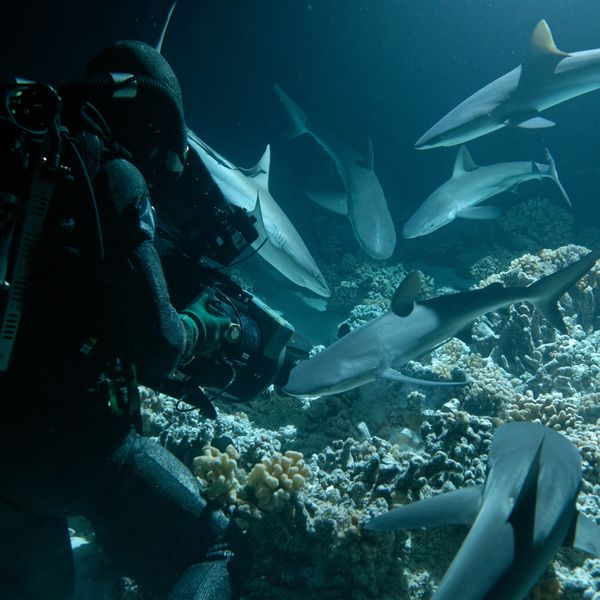 Over the past several years, climate change has become an increasingly prevalent and unavoidable issue in our everyday lives. As a growing number of people take the threat of global disaster seriously, we're turning to written reports, expert opinions, and heavily researched documentaries to not only help make sense of where we stand, but also to learn how we can help change course. In honor of Earth Day 2019, here are a few of the most eye-opening environmental documentaries you can stream on Netflix right now. (Photo via Sophie Lanfear/Silverback/Netflix)

Our Planet (2019): Unlike the BBC's beloved Planet Earth and Blue Planet series, Our Planet focuses directly on how each ecosystem featured is currently being threatened by climate change. One scene in particular has caused an appropriately dramatic reaction: a group of Russian walruses falling down a steep rock cliff to their deaths. Narrator Sir David Attenborough explains that receding ice levels have left fewer places for the animals to gather, highlighting just how devastating the warming of the planet has already become. (Photo via Gisle Sverdrup/Silverback/Netflix)

Cowspiracy: The Sustainability Secret (2014): Made by the same team who brought us 2017's controversial What the Health documentary, Cowspiracy is, on its surface, a look at the damaging environmental effects of the livestock industry. Like What the Health, much of the information is presented from a very pro-vegan perspective, and not a lot of balanced reporting is offered. Still, it can serve as a starting point to learn about how meat production uses more resources and contributes more to global greenhouse gas emissions than, say, a plant-based diet, and that may help us make more informed food choices. (Photo via Cowspiracy)

Before the Flood (2016): Known environmental crusader Leonardo DiCaprio serves as both producer and host of this documentary about Earth's ongoing climate crisis. In it, DiCaprio travels all over the world to learn about how the warming of the planet is already wreaking havoc on communities. While it is loaded with depressing information (this is a climate change documentary, after all!), it also tends to be quite hopeful in encouraging viewers that their efforts can make a difference. (Photo via Gabriel Olsen/FilmMagic)

Chasing Coral (2017): Coral reefs not only serve as a nurturing and essential environment to all ocean life, but also help protect coastlines from flooding during extreme weather events. Unfortunately, due to warming sea temperatures, overfishing, pollution, and other human activities, their vivid, beautiful ecosystems are facing rapid decline. Chasing Coral attempts to document this "coral bleaching" and the devastating economic and environmental effects it could have — as well as the wider problems it may represent. (Photo via Netflix)

The True Cost (2015): The fast fashion industry is notoriously terrible for human rights infractions. The True Cost explores not only the human lives that are on the line every day to produce these cheap chain-store garments, but also how the products flood landfills and their manufacturing process hurts our planet. You'll never shop the same way again after watching this one. (Photo via The True Cost)

A Plastic Ocean (2016): In the face of realizing its irreversible environmental effects, the world is slowly moving toward banning many single-use plastics. A Plastic Ocean starts out as a documentary on blue whales but quickly turns into a study on the devastating effects that plastic pollution has had in the lives of ocean animals, from the whales, to dolphins, to seals, and more. It's an eye-opening look at what our plastic use is doing to these creatures, and to the state of much of our own food supplies. (Photo via A Plastic Ocean)

Sustainable (2016): Finding smaller-scale, sustainable food solutions isn't as easy a way to feed the world's growing population as big agriculture, but that isn't stopping many from trying. In Sustainable, a seventh-generation family farmer works toward building a movement of his own in the city of Chicago, outlining not only small changes we can all make in our consumption choices, but also the negative effects of the major food industries. (Photo via Sustainable)