Beyond Likes: You’ll Soon Be Emoji-ing Your Reactions on Facebook 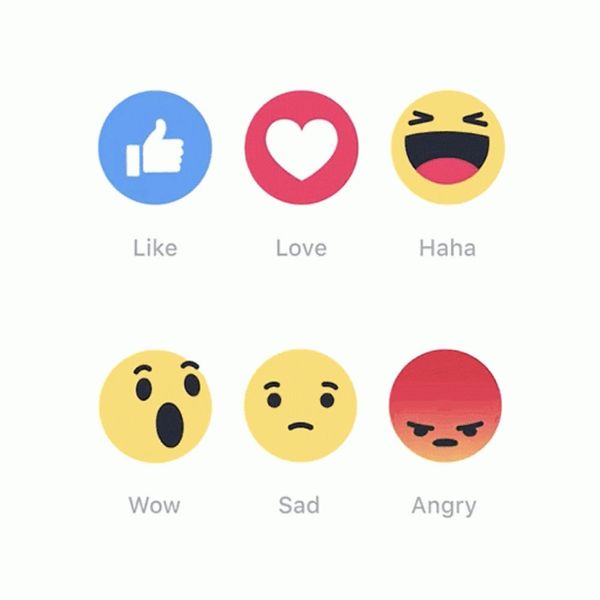 Like it or not, when it comes to social media networks, Facebook is still on top — and it’s okay to be totally obsessed, it turns out. It’s the great connector, in a way. It’s a place where we go to get news, connect with friends and even check in on what our fave celebs are doing. The network has been transforming itself to better fit into every corner of our lives, including easing heartbreak during breakups by hiding posts about your ex. There’s even been rumors bouncing around about Facebook finally rolling out that Dislike button that has been so often requested. The social media company heard those requests and decided to do one better — er, or more like six better.

Reactions consists of six emoji, in addition to the pre-existing thumbs-up Like button. And, more adorably, the emoji are animated when you scroll over them. The new Reactions are: love, haha, wow, sad and angry. Basically, all the feels. Now you can react appropriately to your friend’s posts about his dog being sick, getting a new job or sharing an interesting link.

The company has been testing the product since last October in select markets and it looks like they’re finally ready for the big reveal. Since they’re original October reveal, Facebook decided to do away with one reaction since the testing: yay. And also, don’t expect the Dislike button to ever happen. Chris Cox, Facebook’s Chief Product Officer and the man who masterminded Reactions, told Bloomberg, that would just “sow too much negativity.”

Facebook is rolling out Reactions worldwide in just a matter of weeks, so stay tuned. Eek! So excited.

What do you think about Facebook’s latest move? Tweet us @BritandCo!

Kimberly Wang
Kimberly Wang writes about all things pop culture, tech, style, and beauty. She's a Bay Area transplant and has an MFA in Creative Writing from Columbia University. On a sunny New York day, you can find her hanging out with her mini schnauzer Isabelle Jellybean on a blanket in Central Park.
Emoji
Tech
Emoji Facebook Tech News
More From Tech