22 Pieces of Art to Honor Your Inner Fangirl 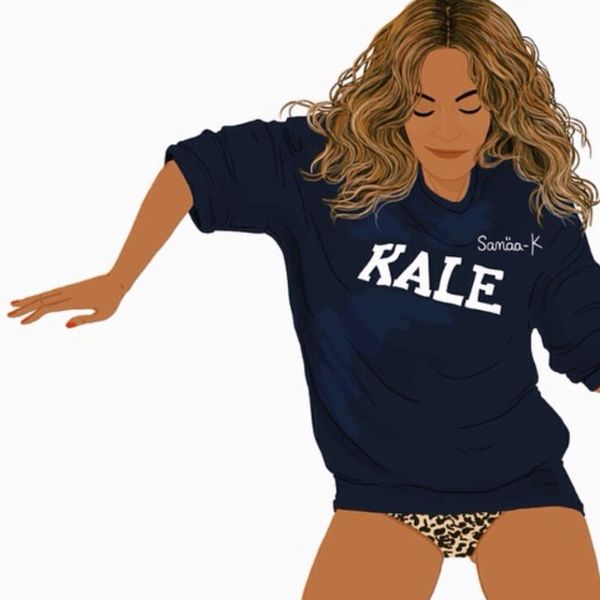 When a hit TV show’s finale fades to black, they’ll be there. When a bookstore throws a YA launch party, they’ll be there. When an artist secretly drops a new album overnight, YA’LL KNOW, they’ll be there. We’re talking about super fans: those loyal lovers of pop culture phenoms and cult classics who have turned Comic-Con into one of the biggest events of the year. And while we do love a creative fan fic now and then, our latest obsession is fan art. We picked out some of the most amazing pieces of original art from around the web, and it’s got us pining for these characters all over again — just in time for summer binging.

1. Parks and Recreation: If you think Leslie Knope looks super as Robin, just wait until you see Ron Swanson as Batman and Jerry/Larry/Terry as Hawkman. (via Vicktrola)

2. Orange Is the New Black: Forget about the love Gatsby had for Daisy; it’s all about the love Crazy Eyes has for her Dandelion. (via Dylan Shaw/Netflix)

4. Superheroes: What are all those Marvel and DC Comics characters doing in their spare time? Just chillin’, from the looks of it. (Bonus: This artist also brings his comic drawing style to RuPaul’s Drag Race.) (via Chad Sells)

5. Comic-Con Everything: If there’s a show, movie or musical that you adore, odds are this magnificent illustrator has covered it. (via Alice X. Zhang)

6. Game of Thrones: And you thought the Iron Throne was multi-faceted. Be sure to check out how the artist creates these lifelike graphic portraits. (via Mordi Levi)

7. Disney: The gang’s all here in this whimsical collage of Disney’s best good guys and bad guys. The artist has also done a group shot of Game of Thrones characters, which somehow makes them look downright cuddly. (via Margaux Saltel)

8. Harry Potter: There’s nary a richer world than the Potterverse, and this artist has spared no detail from some of the books’ heavier scenes. Plus, some of the imagined scenes are so realistic, we’re more than happy to consider them canon. (via Burdge)

9. Leading Ladies: From Rihanna to Angelina to Halle, this artist has created pop art portraits of some of the hardest-working women in Hollywood. (via Egle Kristensen)

10. Emoji Fan Art: Yeah, we thought we were pretty good with emojis too. That is, until this Instagrammer’s pop culture portraits put ours to shame. It’s like macaroni art for your smartphone. (via yungjake)

11. Super Mario Bros.: Princess Peach may have always been the damsel in distress, but she’s front and center in this illustrator’s tribute to Super Mario Bros. Check out the rest of her blog and store for doodles of another strong #girlboss, Hermione Granger. (via Michelle Hiraishi)

12. Solange: This fan’s digital artwork is bold, bright and offbeat, just like Solange. (via Natalie Blake)

13. Intense Character Portraits: Much like the latest superhero movies have made Batman, Superman, et al. far more dramatic than their comics ever suggested, this fan adds some serious gravitas to characters you wouldn’t expect, like Scooby Doo and Calvin and Hobbes. (via CoranKizerStone)

14. Disney University: Mike and Sully got to attend Monsters University, but what about Jasmine, Snow White, Simba and Nala? Even Peter Pan, the boy who wouldn’t grow up, becomes a millennial in this series. (via Hyung86)

15. Breaking Bad: One look at this infamous teddy bear is all it takes to remind us of just how bad Walter broke. (via sketchesnatched)

16. GIRLS: We can’t get enough of the antics of Hannah, Marnie and co., which is why Girls Illustrated is a must-follow blog. (via Nina Cosford)

17. The Mindy Project: Even Mindy Kaling herself bought this print. We’re suspect she keeps it safely stored next to her signed photo of Kris Jenner. (via Roaring Softly)

18. Doctor Who: Is it even possible to improve upon the classic Americana that is a Normal Rockwell painting? Turns out the answer is a resounding yes when you Photoshop it to include your favorite classic TV shows. (via Rockbetter)

19. Mad Men: Mad Men will always go down as one of the most fashionable shows on TV, so it’s perfectly appropriate that fashion artist David Downton sketched such stunning portraits of the show’s characters. (via David Downton /Vogue UK)

20. Future Harry Potter: Can’t wait until the West End stage production of Harry Potter and the Cursed Child to find out what happens to HP and friends? Indulge your imagination in these lively drawings of the next generation of Hogwarts students. (via TwiggyMcBones)

21. Agent Carter: Marvel should seriously consider using this fan art as an official poster for its kickass secret-agent series. (via Dracophile)

22. Pop Culture Posters: From the banana stand to the Death Star, from JJ’s Diner to Bob’s Burgers, we think this fan art will fit in perfectly with your other retro travel posters. (via Andrew Heath)

Are you a diehard fan of a particular series, movie or artist? Have you ever created fan art before? Share your fandom in the comments!

Molly Griffin
Molly is a writer and editor from Boston who loves traveling, eating and occasionally being a little too candid. She lived in Dublin, Ireland for the last four years but recently moved to San Francisco to escape the rain. Now, she’s on the lookout for a good proper pub.
Home News
More From Home News