18 Knope-Approved Ways to Bid Adieu to Parks and Rec 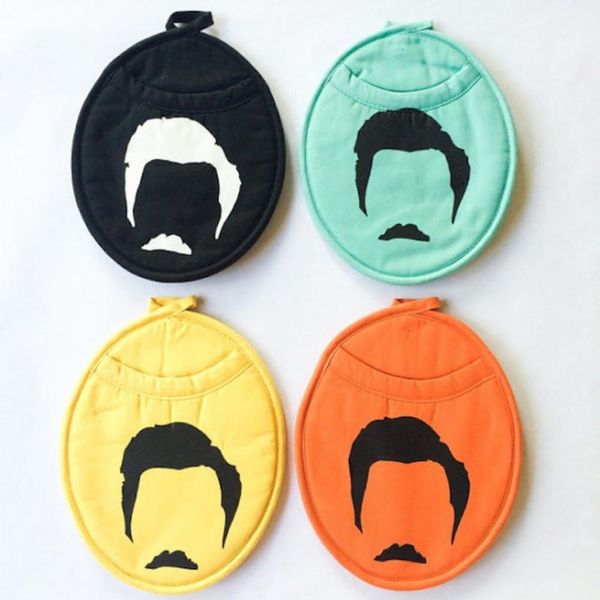 Tonight marks the start of Parks and Recreation‘s farewell season and we’re experiencing a full spectrum of emotions about it. While we really want to hold on to the lovely Leslie Knope (and Tom Haverford, if we’re being totally honest) and never say goodbye, we are also reminiscing about all the hilarious obstacles we’ve seen our favorite Pawneeians go through. From a Leslie-adorned tote to Ron Swanson-inspired kitchenware, here are 18 fabulous ways to treat yo’self in celebration.

1. Leslie Knope Mug ($15): There’s almost no better way to start your morning than by drinking coffee out of this mug. One look at Leslie, our lady of ambition, will motivate you to be and try your best at whatever it is that you do.

2. Start Spreading the Mews Dress ($70): While we might not be able to create a handmade masterpiece like Leslie’s wedding dress, we’re taking a cue from the fabric with this newsprint dress. Leslie Knope is quite the trendsetter.

3. Knope We Can Tote ($19): Leslie’s campaign for city council was one of the biggest events in Parks and Recreation history. And as much as we love Paul Rudd (and his character, Bobby Newport), there’s no way we would have voted for anyone other than her.

4. Parks and Rec Peanuts Poster ($13): This has to be one of the cutest things we’ve ever seen. Here’s to hoping that they don’t all speak in the same horn-like voice as the rest of the adults in the Peanuts world.

6. Ovaries Before Brovaries Throw Pillow ($25): Stand by your gal pals, chicas! We wholeheartedly support the concept of Galentine’s Day. This would make the perfect present for your BFF.

7. Friends Waffles Work Tote ($19): This is another perfect example of why Leslie Knope is our role model: She totally has her priorities straight in life.

9. Parks and Rec iPhone 6 Case ($35): The print on this case includes a saxophone for Duke Silver (shh!), a Batman mask for Ben and bacon and eggs for Ron. These are most definitely a few of our favorite things.

10. Pawnee: The Greatest Town in America ($16): Yes, folks, this is a real, published book. It would feel right at home on your bookshelf or even displayed on a coffee table.

11. Ron Swanson Print ($18): If you know a meat lover who takes her cues from Ron Swanson, then she’ll love this “You Had Me at Meat Tornado” print.

12. Ron Swanson Birthday Card ($4): The inside of this card reads, “When people get a little too chummy with me, I like to call them by the wrong name to let them know I don’t really care about them.” It’s a classic Ron Swanson line and it makes for a hilarious birthday card.

13. Parks and Rec Art Print ($16): We’re all for reimagined art of the cast, especially when it’s as awesome as this print. The cartoonized Ann Perkins is probably our favorite out of them all. Except… where’s Jerry?

15. Ron Swanson Hot Pads ($12): Got something hot to take out of the oven? Ron Swanson is here to protect you.

16. Li’l Sebastian Fitted Shirt ($29): Ladies and gents, this is the shirt you’ve all been dreaming about.

17. Treat Yo’self Mug ($22): It’s time to treat yo’self with this great, hand-painted mug. The front of the mug is fantastic, and there’s even an ice cream cone on the back!

18. I Love You and I Like You Card ($4): Last but not least, a greeting card that fully captures our feelings towards the series. This line was one of the sweetest moments of Ben and Leslie’s wedding; it’s the perfect card to get your sweetie for Valentine’s Day.

What about Parks and Recreation’s farewell season are you looking forward to the most? Let us know in the comments below!

Sonia Rao
Sonia is a determined, television-obsessed gal on a quest to find the best cinnamon waffles recipe out there. If she isn’t researching the latest fashion trends or avidly crafting, you can catch her curled up on the couch with a few (meaning a billion) cookies, watching the hilarious antics of Leslie Knope or Mindy Lahiri. Sonia loves writing for Brit + Co as much as she loves desserts, and is equally proud of her quirky, pop culture reference-filled Twitter feed.
TV