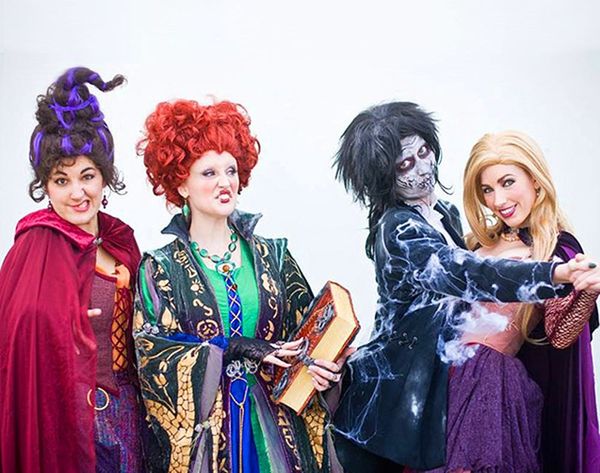 We’re obsessed with Halloween. That’s why we’re a constant supply of costume idea after costume idea, with costume planning for this year already underway. And since we’re already on the lookout, the endless inspo at Comic-Con, the event that unites super fans in every genre, caught our eye. The summer convention brings out some of the wildest pop culture looks, so even if Halloween is a couple months away, who says you can’t Pin these now for inspiration in October? We vote yes.

1. Mystique: You’ll be cleaning up blue face paint for hours, but it’ll be worth it. (via The Dark Room)

2. Maleficent: The ultimate way to portray animated chic is with an Angelina Jolie-inspired getup, don’t you think? (via Tested)

3. Batgirl: Who doesn’t want to play hero for a day? Celebrate the 75th anniversary of Batman by hitting the town in your best Batgirl duds. (via Tested)

4. Harley Quinn + Poison Ivy: Being the hero is overrated. Get the whole group together to go a little Batty and dib your role as super villain. (via Tested)

6. Katniss Everdeen: The Hunger Games heroine has been rocking costume-worthy style since the first film, but this Catching Fire look has to be one of our favorites. (via The Sacramento Bee)

7. Steampunk: If you’re going for mostly heroic with a wicked side, channel your inner steampunk princess with this look. (via Telegraph)

8. Zombie: The living dead are all over pop culture right now, and there are endless ways to bring this dead look to life — even as a pretty zombie like the dop dead gorg dead above. (via Telegraph)

9. Star Wars Couple: Star Wars has inspired some of the baddest costumes of the last decade, and this couple dressing up as Leia and Chewbacca this year proves this classic isn’t going anywhere. (via Telegraph)

10. Darth: If Princess Leia is a little too sweet for your taste, maybe you’re better suited for this female twist on Darth Vader. (via Time)

11. Hello Kitty: A Comic-Con costume list wouldn’t be complete without something Hello Kitty, and these two ladies take it to the extreme. (via Tested)

12. Khaleesi + Khal: We are crazy for Khaleesi. There’s no better way to celebrate Halloween than by portraying your favorite Game of Thrones royalty and carrying around a dragon all night. Bonus points if you can get your guy to dress as Khal! (via Vox)

13. Mugatu: We feel like we’re taking crazy pills!! This costume is bringing in the big guns and taking us back, and we’re obsessed. (via Tested)

14. MTV Moon Man: This looks like a serious DIY project, but if you start now, you should be able to create something similar for Halloween. Plus, you’ll be nice and warm for all that trick or treating! (via Tested)

15. April O’Neil: This Teenage Mutant Ninja Turtles costume is brilliant. If you’re a fan of the comics but don’t want to go the obvious route, this butt-kicking news anchor-turned-archaeologist is the perfect option. (via Tested)

16. The Queen of Hearts + Madhatter: Couples costume alert! This dynamic duo will definitely earn you the title of best dressed pair, guaranteed. (via Tested)

17. Michonne: Play one of the most badass characters on television when you dress up as Michonne from AMC’s The Walking Dead. (via Tested)

18. Cast of Frozen: If you’re looking for a unique and totally recognizable group costume, Anna, Kristoff, Elsa and Olaf are definitely a good option. (via Tested)

19. The Bride: Star in your own action movie when you dress up as The Bride from Quentin Tarantino’s Kill Bill. Trust us, no one will see it coming. (via Tested)

20. Master Chief: Just because you’re a girl doesn’t mean you can’t be the main protagonist in Halo’s universe. A bow and a pink tutu should get your point across. (via Tested)

21. Effie Trinket: You can have so much fun with the flamboyant escort from The Hunger Games trilogy. There are so many Effie looks to choose from, but one we love the fuchsia skirt suit with a purple flower hat. (via Tested)

22. Xena: Warrior Princess: We’d be lying if we said we weren’t major fans of this ’90s TV series. Who doesn’t want to watch an ancient princess kicking some Warlord butt?! (via Tested)

24. Sally Skellington: This Nightmare Before Christmas costume is one of the creepiest versions of a rag doll we’ve ever seen. And we love it. (via Tested)

25. Melisandre: As one of the most terrifying characters of HBO’s Game of Thrones, Melisandre (aka The Red Woman) is a gorgeous costume choice… especially for redheads. (via Tested)

26. Ursula: We see tons of Ariel costumes year after year, but this Little Mermaid villain is totally unexpected. And that lavender is lovely. (via The Verge)

27. Jon Snow + Ygritte: This Game of Thrones couple costume is awesome! It’ll take a lot of layers, but it’s undoubtedly a genius costume idea for Halloween. (via The Verge)

Were you following the fun at Comic-Con this year? Are you counting down the days to Halloween? Tell us about your next costume in the comments below!

Hannah Schmitt
Hannah is the managing editor at MetroFamily Magazine in Oklahoma City but her favorite jobs are the ones done at home: loving on her husband and dog, sprucing up the house and entertaining family and friends.
Halloween
Halloween Costumes
Halloween Halloween Costumes