I Drank Fire Cider for a Week, and I Don’t Need Coffee Anymore 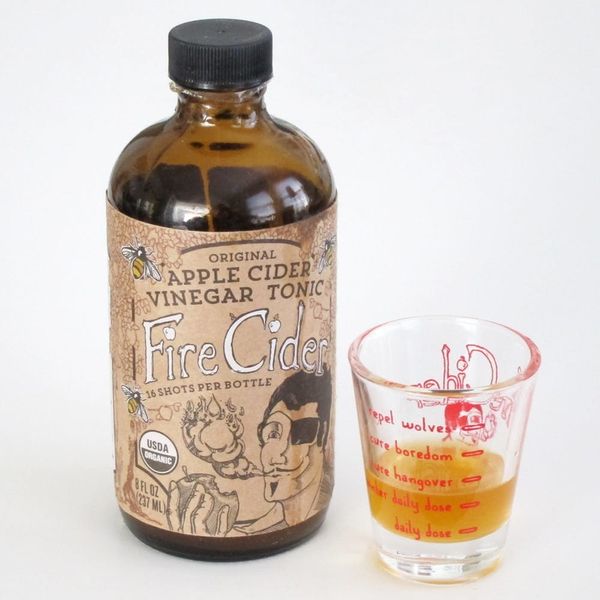 Apple cider vinegar has been touted as the remedy for everything from dull skin to dandruff, so it’s not surprising that fire cider, an apple cider vinegar drinking tonic, has been catching on too. Fire vinegar, as it’s also known, is not unlike a shrub (a fruity, vinegary syrup you mix with water or sparkling water), with apple cider vinegar as its base. Fire cider fanatics claim that it has numerous benefits from curbing cravings to preventing colds. Curious about this much-touted beverage, I drank fire cider on the regular for a week to see if it lived up to the hype.

What Is Fire Cider?

Fire cider was developed by an herbalist in the 1970s. She started with apple cider vinegar, a fermented ingredient proven to have antibacterial and antioxidant properties, as the base, adding other ingredients such as horseradish (for decongestion), ginger (for warmth), garlic and onion (for antibacterial properties), cayenne (to boost metabolism and immunity), and honey to tie everything together and make the drink more palatable. Fire cider is said to restore and invigorate one’s system, and additionally, many claim it has benefits that include boosting energy, warding off colds and flus, easing sinus congestion, lowering blood sugar, curbing cravings, and aiding digestion.

It’s easy enough to make your own version of this tonic at home, but you’ll need to let it infuse for several weeks at a minimum. If you’re looking for a more immediate payoff, you can purchase already-made versions. For my experiment I used Shire City Herbals’ Fire Cider Original Apple Cider Vinegar Tonic ($15), a tonic with certified organic ingredients like live raw vinegar, raw wildflower honey, oranges, lemons, turmeric, habaneros, and black pepper, in addition to the typical ginger, horseradish, and garlic. (They also make a honey-free version that’s vegan.)

Shire City Herbals recommends drinking 1/2 to 1 tablespoon straight up every day in a shot glass with a chaser of water, so as not to erode your enamel. My typical routine for a week took things further, and consisted of drinking a tablespoon multiple times daily: first thing in the morning before breakfast, right after lunch, and around 3pm during my usual afternoon slump. It turns out that fire cider lives up to its name, because my very first shot of it made my eyes pop out of my head and my hair stand on end. I couldn’t imagine what the strange mixture of horseradish, onion, and honey would taste like, but as it turns out, the tonic wound up tasting a lot like the juice of a spicy bread and butter pickle — equal parts sweet, tart, and spicy.

If you’re a fiend for anything pickled, like I am, then a shot of this will be surprisingly enjoyable for you; I actually found myself looking forward to the stimulating jolt on my palate. If that’s not your jam, you can add it to lemonade, tea, or even bone broth. I enjoyed adding a tablespoon to a cup of sparkling water on ice — it tasted a lot like a sparkling shrub but with less acid and sugar than soda. While I’d heard that it’s also popular in other applications, like salad dressings or as a mignonette for oysters, I stuck to the shots to keep things simple and measurable.

I’m no scientist, so it was hard to tell if this drink helped regulate my blood sugar or ward off sickness, but I did conduct my experiment at the peak of cold and flu season and I didn’t feel remotely sniffly. I suffer from pretty bad allergies, and I didn’t see much of a noticeable difference in my sinuses. The surprising difference it did make was that I stopped drinking coffee all week, because I didn’t need it. And since coffee sometimes irritates my stomach, this was a huge perk. Taking a shot every morning gave me the jolt I needed in a way that made me feel fired up without the jitters that coffee can bring. I noticed the biggest impact from taking it during my daily afternoon slump; just a tablespoon could get me back on my feet, and I didn’t need to worry about having trouble falling asleep that night like I normally do with coffee. Will I continue taking it? For now, absolutely — and I even want to try making my own blend. Fire cider may not be the cure-all that it’s touted to be, but for me, it’s a pleasurable pick-me-up without any of the side effects of caffeine.

Have you jumped on the apple cider vinegar tonic bandwagon? Tweet us @BritandCo and tell us about your experience!

Susannah Chen
Over the past decade, Susannah Chen has been a writer and content creator for POPSUGAR, Lifehacker, Eater, Zagat, Williams Sonoma and more. When she's not cooking or writing, she's on the hunt to find the world's best chilaquiles.
Healthy Essentials
Healthy Eating
Healthy Essentials Healthy Living Online Shopping Shopping
The Conversation
More From Healthy Eating