This Running Machine Will Make You Feel like a Superhero 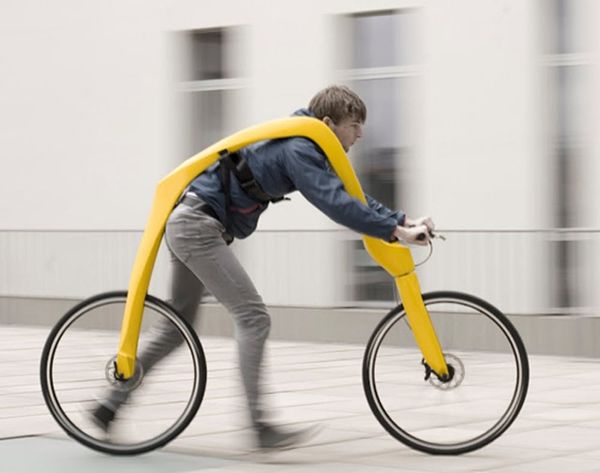 For the most part, bicycles have pretty much remained the same since their creation in 1865. Sure, we’ve come a long way in the sense that we can now fold them to fit in a backpack, 3D print them and lift them with a pinky thanks to carbon fiber. But the actual construction (two wheels, pedals and a seat) has remained the same for the most part. Until now.

Let us introduce you to the FLIZ, a German running machine concept fashioned based on a bicycle’s construction. This contraption has all the components of a standard bicycle — two wheels, handlebars and breaks — with the exception of a seat. How do you bike without a seat? Well you don’t. You run. The FLIZ comes with a five-point harness system which comfortably suspends the rider beneath the frame, with a split at the front for the rider’s head. Riders are perpetually bent forward with their hands on the handlebars. The machine is designed so that the frame relieves pressure on the groin while the harness evenly distributes weight.

Strap yourself in and use your feet to run. The wheels allow you to move significantly faster than if you were to run purely on foot. If you’re headed down a hill, lift your feet up and float all the way down (we’re guessing this is probably as close to flying as we’re going to get anytime soon).

The creators of FLIZ crafted this contraption as an urban mobility unit designed to make getting around on foot quicker and easier. It even comes with space to hang luggage on one of the two horizontal frames, for commuters to store briefcases or book bags. Whether this is actually any more convenient than a bike, we’re not totally convinced. But it definitely could be a fun alternative, especially on a bike track where you could really pick up some speed.

FLIZ could also function as a physical therapy aid or a sort of walker for the 21st century. Because the harness evenly distributes the rider’s weight, there is minimal impact on joints. For those with bad knees or restricted mobility, this could help both regain strength and get around quicker.

Before this running machine can move forward there are some safety issues the company must address. The main concern is that split for the rider’s head at the front of the frame. Even with a helmet on, if an accident did occur, the risk of getting your head trapped in between the two frames is worrisome.

Is the FLIZ going to revolutionize the bicycle industry? Probably not. Is it a fun alternative that can make you feel like superman flying down a steep hill? Absolutely.

Would you try out this running/biking hybrid? Let us know your thoughts.