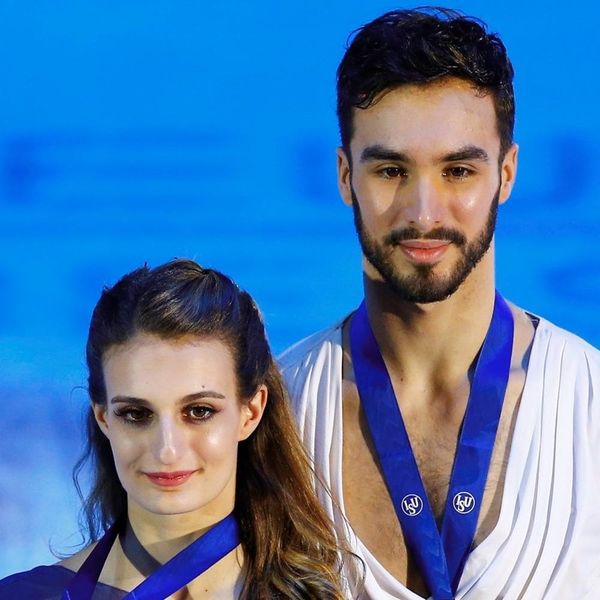 Practice though the athletes might, when it comes time to perform at the Olympic games, just about ANYTHING can happen — and we do mean anything. On Sunday night, things quickly took an unexpected turn for French figure skating team Gabriella Papadakis and Guillaume Cizeron when the former suffered a wardrobe malfunction, living out her own personal version of Janet Jackson’s infamous 2004 Super Bowl moment.

The trouble seemed to occur at the start of their program, when the clasp on the athlete’s costume came undone, exposing her breast on live TV for all to see. “My costume opened up,” she later said of the incident.

It was what Papadakis did next, however, that will define her. Rather than make a scene or rush off the ice to save face, the Olympian did what any champion would do — she put it behind her and finished the performance, embarrassment be damned.

It paid off — the pair scored an 81.93, putting them just 1.74 points behind first-place couple Tessa Virtue and Scott Moir.

“It was difficult. It’s the first time that something like that happened. I tried to stay focused without anything else happening,” she said, tears streaming down her face.

Her partner, too, went with the flow, saying, “It was a great performance considering the costume issue. That is not something you get ready for in your mind when you start the program. It’s hard to stay focused.”

The 22-year-old later addressed the issue at a press conference once more, adding, “It was my worst nightmare, happening at the Olympics…. It happened in the first few seconds. I told myself I didn’t have a choice and that I had to keep going… I felt it right away and then I prayed. That is about all I could do.”

She wasn’t the only one to suffer a wardrobe malfunction this year: Just last week, South Korean skater Yura Min too had a costume slipup when her outfit began falling down her shoulders mid-skate.

Upset though she was, however, even Papadakis realized the strength that came out of the moment. “I think we should be proud we were able to deliver a strong performance with that happening,” she said at the conference.

We think so, too, Gabriella — and we’re not the only ones…

You were phenomenal last night! Skating through a wardrobe issue like a badass! I can't wait for your free skate. Good luck @GabriellaPks

gabriella papadakis of france just did a whole ice dancing routine with her left nipple out and still crushed it. what a rockstar.

They should just give #GabriellaPAPADAKIS a medal for finishing her program sans costume like a CHAMP.

What do you think of Gabriella and Guillaume’s performance? Share over @BritandCo.

Nicole Briese
Nicole is the weekend editor for Brit + Co who loves bringing you all the latest buzz. When she's not busy typing away into the wee hours, you can usually find her canoodling with her fur babies, rooting around in a bookstore, or rocking out at a concert of some sort (Guns N' Roses forever!). Check out all her latest musings and past work at nicolebjean.com.
Costumes
Style News
Costumes Olympics