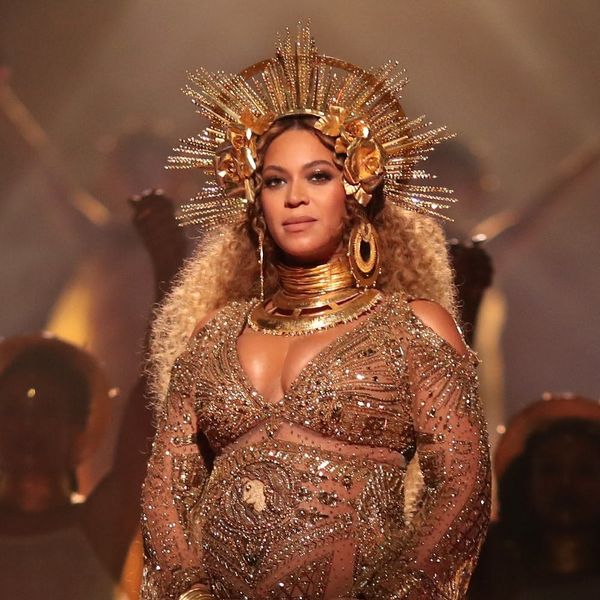 Beyoncé may have gained (and earned!) a rep as a goddess within the biz, but when it comes to the influence behind her current artistic performances (not to mention images like her record-breaking pregnancy pic), there is truly a whole lotta spiritual significance behind them, including her latest unforgettable Grammys appearance.

Centering her performance around her pregnancy, showing images of herself with her mother and daughter and giving off a very Virgin Mary-esque vibe, the artistic influence behind Beyoncé’s set comes from African, Hindu and Roman goddesses who signify womanhood.

With her headpieces and striking belly-baring bikini awing the crowd, each was inspired by higher beings such as the African water spirit Mami Wata (or Mother Water) and, according to PBS via The Washington Post, the Nigerian Yoruba water goddess of “female sensuality, love and fertility” called Oshun (or Osun).

The many-armed Hindu goddess Kali was also referenced during the performance when Bey’s dancers draped a long silk cloth over her crown and extended each of the ends around her.

Beyoncé, who herself posted on her website, “Mother has one foot in this world and one foot in the next, mother black Venus,” also gave a nod to the Roman goddess again with the floral arrangements onstage.

With her dancers even full-on bowing to her, the message wasn’t exactly subtle, but it was certainly memorable.

What do you think about Beyoncé’s goddess-filled performance? Tweet us @BritandCo!

Desiree O
Desirée O is a ‘Professional Bohemian’ who loves anything and everything related to the arts, entertainment, and pop culture. She ADORES being a ‘Newsy’ for Brit + Co, covering all of the latest tidbits of awesomeness that you want to read about. When she’s not writing, she’s either making messy art, going on long adventurous walks with her camera, or poking around over at bohemianizm (http://www.bohemianizm.com/). You can find out about Desirée O and her work at http://DesireeO.com/ or follow her on Twitter @DesireeO.
Beyonce
Entertainment
Beyonce Grammy Awards
More From Entertainment