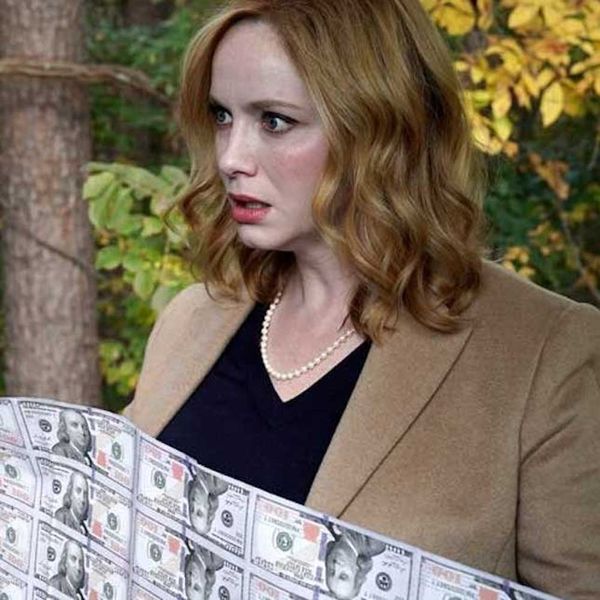 Last week, Beth (Christina Hendricks) went to Rio (Manny Montana) to ask about doing a job. She claims this week that it’s about the Good Girls still needing money, which it partly is… but Beth has gotten a taste for the criminal life and she wants more. Let’s see how this plays out.

First, Rio decides he can indiscriminately choose what job the ladies do for him, so he drops off a buddy who has been shot in Beth’s daughter’s bed. As funny as that was, I call BS on Rio being that careless. What if the daughter had freaked out and called the police? What if the guy woke up and hurt a kid? That’s attention Rio doesn’t need, so I wish the show had kept it a smidge more realistic and had Rio, like, dump the guy on the porch or something.

Anyway, Annie (Mae Whitman) and Ruby (Retta) are aghast that Beth would get them involved with Rio again… until they see how much cash he’s offering them to babysit his wounded friend. When the wounded friend escapes, however, they think they’ve lost all the money and Beth’s car (because he stole it), but he brings it back because… criminal with a heart of gold, I guess? That was also a little hard to swallow.

Look, this show is a lot of fun. I’m enjoying it immensely. But parts of this episode felt a little harebrained — like the bad guy conveniently brought back Beth’s van and offered to do the ladies a favor, so Annie had him scare (and assault, though she didn’t ask for that or know it was going to happen) a kid at school who has been cruelly bullying her daughter. It is at once both scattershot and too pat, if that makes any sense.

And then there’s the randomness of Ruby dealing with awful customers at work and losing her job and Dean lying to Beth that he has brain cancer. All the women need money — the stakes don’t have to get higher, you know? And as enjoyable as it was to watch Ruby tell off that snotnosed d-bag and his awful mother, it completely took us out of the other action.

I would have rather seen more of the women trying to solve the gunshot wound victim problem (because that got really short shrift considering how major it was) and less of the other stuff that isn’t really relevant to anything.

The one part of the episode that did really work for me, however, is the scheme the women come up with to make money with Rio. They realize they can buy a bunch of expensive items at Cloud 9’s version of Sam’s Club (and let me tell you, I was so excited to see Superstore‘s Cloud 9 appear on this show) and return the stuff after Beth’s son’s birthday party. Stores like that always have very generous return policies, sometimes even without a receipt.

But their idea is to get rid of Rio’s counterfeit money by using it at Cloud 9 and then returning the items for real money. They ask for 20 percent of the profit, which seems fair, but they settle for 12.5 percent. Rio snarks that he usually gives 30 percent. Yeah, shoulda held firm at 20 percent, Beth.

So, that’s where we stand now. The women are going to start a money laundering scheme as the FBI starts looking at them a little, thanks to Boomer (David Hornsby). He alerts a local agent (James Lesure) that he thinks the ladies are up to something, and at the same time tries to get in Annie’s good graces like he’s still interested in her. There is a lot to unpack with Boomer, and honestly, he should probably just be put in jail. But for now, he’s (sort of) helping the FBI look into Rio and, by extension, the women. Hmmm.