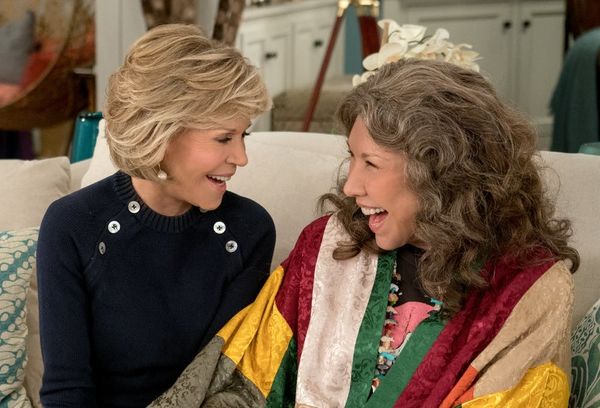 If you haven’t yet watched the fourth season of Grace and Frankie, now is the time to catch up. Season 5 premieres Friday, January 18, and if this new trailer is any indication, things are about to get weird for our favorite BFFs.

Over the course of the first four seasons, fans of the Netflix hit have watched Grace (Jane Fonda) and Frankie (Lily Tomlin) rediscover their own identities after finding out that their husbands (played by Martin Sheen and Sam Waterston) are in love with each other. They hit a stride of sorts in seasons 3 and 4, but going into season 5, their lives have been turned upside-down once again.

After fleeing their assisted living community at the end of season 4, the women are now fighting to remain in their beloved beach house, which has been sold out from under them. (Yes, that is RuPaul as a realtor.)

“We are taking our house back!” Grace declares. When her children ask what she and Frankie plan to do if one of them falls or has a stroke, she replies defiantly, “F*ck it!”

The women carry that attitude into other parts of their lives, too. Frankie, for her part, is determined to get back to the person she used to be — “raw, uncompromising, dangerous.” And Grace rekindles her romance with the handsome Nick (Peter Gallagher). There’s also a bonding moment between Frankie and Robert, thanks to some edibles and a heck of a lot of Chinese takeout.

Their kids think the women are losing control, but Frankie says it’s actually the opposite. “Maybe I’m acting like a grown woman who is finally living by her own rules,” she says.

Are you excited for the fifth season of Grace and Frankie? Let us know @BritandCo!

Desiree O
Desirée O is a ‘Professional Bohemian’ who loves anything and everything related to the arts, entertainment, and pop culture. She ADORES being a ‘Newsy’ for Brit + Co, covering all of the latest tidbits of awesomeness that you want to read about. When she’s not writing, she’s either making messy art, going on long adventurous walks with her camera, or poking around over at bohemianizm (http://www.bohemianizm.com/). You can find out about Desirée O and her work at http://DesireeO.com/ or follow her on Twitter @DesireeO.
Netflix
Streaming
Netflix Streaming