Yikes: Is Your Guy Stuck in “Guyland”? Here’s How to Tell 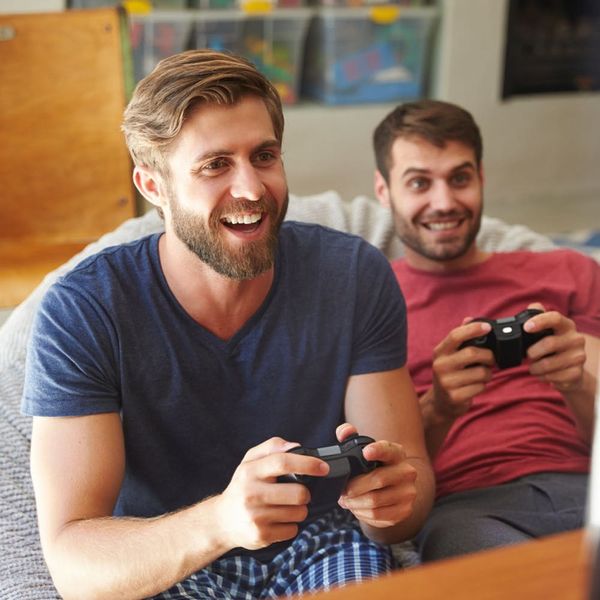 As #girlbosses, we somehow maintain a precarious, yet impressive work-life balance, save enough time and creativity to snag an awesome birthday gift for our bestie and scroll through the best apps of the week — all before dinner. But our world also has a counterpart: Whether it’s your brother, bestie or boo, your world probably has a few dudes in it. And many of those guys live in Guyland, a term coined by Michael Kimmel in a book by the same name. In it, the sociologist and author explores the mysterious world where young millennial boys become men.

Guyland is “both a stage of life, a liminal, undefined time span between adolescence and adulthood that can often stretch for a decade or more, and a place — or rather, a bunch of places — where guys gather to be guys with each other, unhassled by the demands of parents, girlfriends, jobs, kids and the other nuisances of adult life,” Kimmel says in the book. Does this ring a bell? Read on for five signs that a guy in your life lives in Guyland.

1. He was raised to be a good kid — and probably still is. According to Kimmel, most inhabitants of Guyland are college-educated and from suburbs of urban areas, although many guys hail from all walks of life. Here’s the thing: Guys in Guyland don’t necessarily want to be there. We talked to Media Studies Professor Holly Holladay, who told us, “Guyland is not individual guys. It’s a world that society has created for them and expectations that we’ve created for them.”

2. He’s a little directionless. These are the guys who “blend into the crowd, drift with the tide and often pass unnoticed through the lecture halls and multistory dorms of America’s large college campuses.” While more and more identities are acceptable (think: high school groups, such as nerds, hippies and athletes), “the pressure not to choose one of them” is also increasing because so many identities are marginalized by boys. This results in a prevailing mainstream culture that guys in Guyland strictly adhere to.

3. He can be afraid of women. While men respect women, guys in Guyland fear the fact that a woman is responsible and holds others accountable. The passport to life in Guyland is a single relationship status, because a boy’s “brothers are his real soul mates, his real life-partners,” with no room for female influence. This mentality might be why so many guys are afraid to commit.

4. He follows a novelty-seeking crowd. A telltale way to recognize a guy in Guyland is to pay attention to what he does for fun. Kimmel describes this brand of behavior as the “‘boyhood side of the continuum” that guys are so reluctant to leave; it consists of sports, video games and a college-like reliance on alcohol and pizza. To put it simply, “it’s all the behavior that makes the real grownups in their lives roll their eyes and wonder, ‘When will he grow up?'”

5. He’s almost a man — but not quite. Guys in Guyland adopt a Peter Pan mindset where they “shirk the responsibilities of adulthood and remain fixated on the trappings of boyhood, while the boys they still are struggle heroically to prove that they are real men, despite all evidence to the contrary.”

If these signs sound familiar to you, fear not: Holladay says that since Guyland is a societal shift, it’s also a state of being that can be influenced by society. By encouraging responsibility in the guys in your life, you’ll bring them one step closer to leaving Guyland.

Have you recognized any other symptoms of Guyland? Let us know @BritandCo!