Here’s What Model Hailey Baldwin Eats in a Day 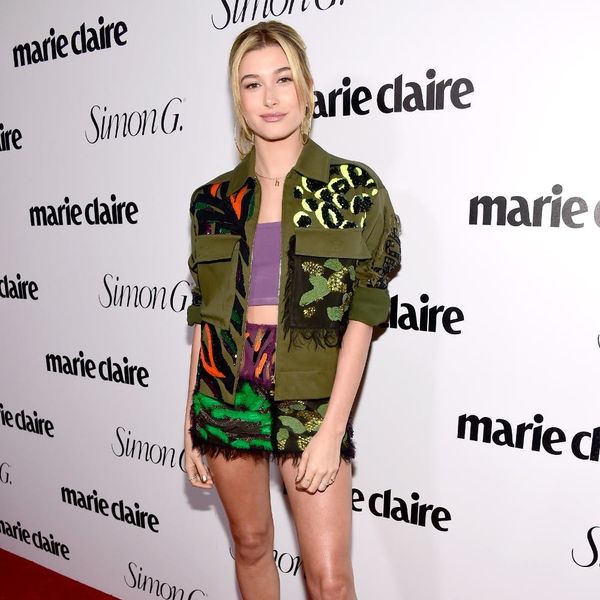 While you wouldn’t expect Bella Hadid’s diet to be so indulgent (pretty jealous of that metabolism) and Mariah Carey’s pre-wedding diet to sound so surprisingly delicious (and chill), Hailey Baldwin is keeping to a MUCH stricter food routine. All about nourishing both her skin and her bod, the model is seriously committed to clean eating… that is, until she decides to break the rules.

The 19-year-old model (and rumored Justin Bieber GF) was attending the opening party for Magnum in New York while telling Elle, “I try to be very strict about eating, just for my skin and my body.” While the model looks HAWT, we’re glad there’s a healthy goal driving her fairly strict diet. So what does a daily menu look like for Hailey? First, a heck of a lotta water. “I try to drink, like, a couple bottles throughout the day. I don’t know how many glasses that would amount to, but it’s important.” Definitely important. Drinking lots of water keeps your bod hydrated and is great for your skin.

Brekkie is a simple deal for Hailey, and it sounds similar to what a lot of people eat in the early hours of the day. For breakfast, the model usually sticks to eggs, oatmeal or “some type of healthy protein or a smoothie.” Lunch is also pretty basic. It’s usually a “salad, fish, grilled veggies or maybe a sandwich,” but the model takes care to avoid gluten. “I love a good kale Caesar salad [but with] no croutons. That’s usually one thing I leave out.” Sacrificing croutons may not be easy, but it’s apparently worth it.

She doesn’t really mix it up too much for dinner, but Hailey certainly knows how to enjoy dessert, even being a proud #MagnumAmbassador. Now that’s a yummy gig! “I really like the Magnum bars, obviously that’s a great one,” she tells Elle, but she generally cuts it out. “Sugar’s a big one for everyone, I think,” Hailey says. Ah, sugar. What a love/hate relationship.

But that doesn’t mean that Hailey doesn’t give herself some flexibility every once in a while. We know that cheat days can actually help us keep fit and lean, and this Baldwin babe is totally on board with that. “A cheat day for me, the first thing that I crave, I’ll eat. That’s my rule,” she says. Pancakes, a cheeseburger and fries are all great options, according to her. And cheat days aren’t the only time that Hailey lets herself indulge. “I did go to the Maldives not too long ago. I felt like that was like, super-lavish, indulgent. I was eating whatever I wanted when I was there because… you’ve got to take advantage of those moments.”

We feel ya, gal. Live it up and eat it up — especially when trying local cuisine is part of the experience.

Desiree O
Desirée O is a ‘Professional Bohemian’ who loves anything and everything related to the arts, entertainment, and pop culture. She ADORES being a ‘Newsy’ for Brit + Co, covering all of the latest tidbits of awesomeness that you want to read about. When she’s not writing, she’s either making messy art, going on long adventurous walks with her camera, or poking around over at bohemianizm (http://www.bohemianizm.com/). You can find out about Desirée O and her work at http://DesireeO.com/ or follow her on Twitter @DesireeO.
Diet
Celebrity News
Diet
More From Celebrity News