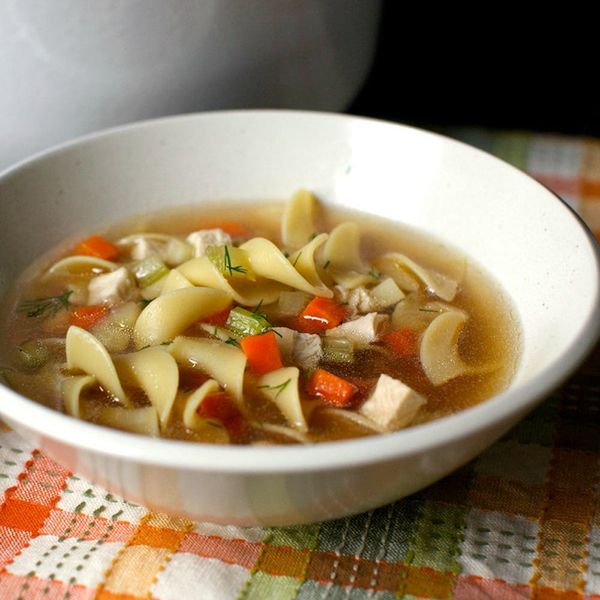 You don’t need to have a cold to enjoy a bowl of chicken soup. But if you do have a cold or just feel one coming on, know that there may be some truth to Granny’s go-to.

According to Osteopathic Physician Dr. Joseph Mercola, chicken soup has been used to treat the common cold since the 12th century. For some time we chalked it up to the nutrients we’re consuming plus the effects of steam easing the nasal passages as we eat or drink the soup. But researchers today know that there is more to it than that. Studies have shown that eating hot chicken soup increases the movement of nasal mucus more than just drinking hot water does.

“Chicken contains the amino acid cysteine, which can thin the mucus in your lungs and make it less sticky so you can expel it more easily,” explains Dr. Mercola.

Chicken soup also contains compounds that may alleviate inflammation. And inflammation is what causes all the uncomfortable symptoms, such as stuffy nose, watery eyes, and nasal drip and headache due to congestion.

For health and science nerds among us, Dr. Mercola breaks it down: “When you’re sick with a cold, part of your body’s inflammatory response is to send white blood cells to your upper respiratory tract to help fend off the invaders. This, however, may stimulate many of the symptoms of the common cold, including mucous production, cough, and sneezing.

…Chicken soup can help stop the migration of the cells, which could potentially help to stop some cold symptoms from developing.”

So, chicken soup works whether you have a cold or just want to prevent one. And if that’s not enough to convince you to make some chicken soup today, here are a few more benefits: it’s easy to make, inexpensive, and doesn’t have to take a lot of your time. If you use a crockpot, slow cooker or pressure cooker that has a “keep warm” setting you can set it and forget it.

Deb Perelman over at Smitten Kitchen has a recipe for Classic Chicken Noodle Soup that will get you started. Another one she developed called My Ultimate Chicken Noodle Soup is a copycat of her son’s favorite from Katz’s Deli — the New York City diner that was the location for Sally’s mock orgasm scene in the movie “When Harry Met Sally”.

Both of Deb’s recipes start with making the stock, which can take 4 to 5 hours. If you don’t have time to mind a stock pot, Tammilee over at Tammilee Tips has a slow-cooker recipe for Crockpot Chicken Noodle Soup. Toss all the ingredients into a crockpot at once, turn it on before you leave for work and you can be eating chicken soup tonight.

Do you have a chicken-soup go-to recipe? Tag us on Instagram @britandco. Come on — share the love!

Sally Jones
Sally Jones is a writer and editor living in New York City. She has worked at many websites including iVillage, Ladies Home Journal, More, Parenting, Cosmopolitan, The Knot and YourTango, in jobs ranging from editor to COO. Renovation and interior design are her unhealthy obsessions hobbies. She has renovated every home she's lived in, including the rentals, and like... whoa, who does that? You can catch her at her blog Renov8or.
Soup Recipes
Recipes
Soup Recipes
The Conversation
Reviews:
More From Recipes