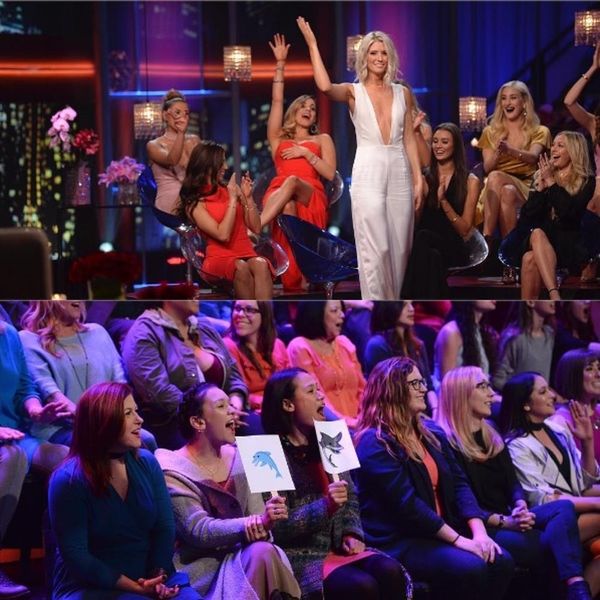 This season of The Bachelor has been as epic as any other trip around the mansion, with a villain (Corrine, natch), lotsa (fake?) crying, and as many cringe-worthy moments as we could want to deviously indulge in. But last night’s Tell-All special episode gave us even more to chat about, and that includes all of these juicy moments that you didn’t see on TV.

“This is going to work a lot better if there aren’t 17 conversations going on,” Chris Harrison told the group of women as the sitch immediately stirred up sparks, with the host even exclaiming, “You guys are fired up!” And while we saw plenty of action, the special was only two hours long, which means that plenty of on-camera moments ended up on the chopping block.

For instance, the gals kept the booze flowing throughout the night, with Corrine asking, “Anyone have Champagne?” before hopping off-stage to nab some herself. The ladies passed around red solo cups and sipped while gossiping about the fact that they were “auditioning for Bachelor in Paradise!”

While other talk centered around naps, the Corinne vs. Taylor drama (with Chris eventually getting the pair to “hug it out”), and even a few ladies getting a little sloppy (one gal fell off the stage and another almost tripped over the couch), Liz admitted that even though her anonymous arrival in the limo was a hit, she originally had another idea in mind. She intended to show up with the wedding invitation (ya know, from *that* night) in hand with her phone number written on it as a nod to her, er, *shared encounter* with Bachelor Nick Viall.

But the most interesting moment that wasn’t shown on air might have been when Rachel Lindsay ran into Viall backstage before AND after taking her turn in front of the camera. In their first real reconnection since she left Finland, Nick asked, “How are you? I’m so happy for you. I’m proud of you. Talk to you later. Kill it, alright?”

And indeed she did. When she came off stage, Nick followed, asking, “Was it awkward?” She responded by telling him that when she watched her elimination episode, “I was keeping it real… I was like, oh my god! It brought me back.” But keeping her vibe upbeat (possibly because as the new Bachelorette she has plenty of romantic possibilities ahead of her), she assured Nick that she wasn’t “upset” about the sitch between them.

We wonder how smoothly Rachel will handle things when her BacheloretteTell-All special rolls around.

What was your fave moment from the Tell-All special? Let us know @BritandCo!