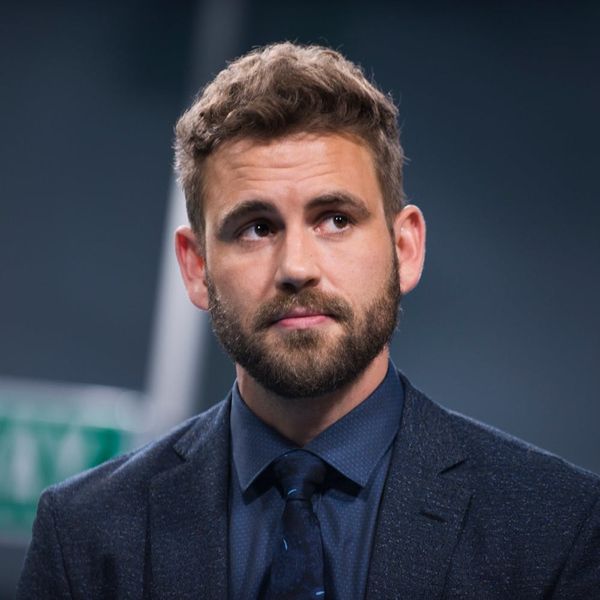 This season of The Bachelor has already been a wild ride, with awkward dates, Corinne making her mark as the villain and now, a dude who was experiencing all of the feels during the latest episode. And while we’re totally here for men who are in touch with their emotions, plenty of folks are making fun of Nick for crying. Yep, for crying.

While there’s no doubt that this week’s episode was a (SPOILER!) rollercoaster of potential love and crushing disappointment, it was all a bit much for Nick, who let his softer side take over. Meaning: He cried.

Fans of the show were, er, not quite sure his tears were real, and voiced their feelings on Twitter…

Stop crying. No one feels bad for you, Nick. #TheBachelor pic.twitter.com/AqveUJOKuF

Nick is ugly crying. I don't like it #TheBachelor pic.twitter.com/5DaQed45eR

As nick is talking and crying… #TheBachelor pic.twitter.com/3yIl72yhed

My face at nick crying and making everyone else cry with his crying #TheBachelor pic.twitter.com/PeFYN6sE8X

Nick going into that room and crying to the girls #TheBachelor pic.twitter.com/JnieWah4gP

Nick's crying because he realized the show is about finding someone special and not just sucking whipped cream. #TheBachelor pic.twitter.com/hoOAq8IWxP

Nick: *crying* I just want to find love and…*sobs* it just been so hard for me…
Me:
#thebachelor pic.twitter.com/HU4A4ICuV1

Nick crying to these girls right now about slaughtering 3 women off the show tonight….. #TheBachelor pic.twitter.com/p57wmIWUHx

While we’re all about men being in touch with their feelings (of course!), it’s also important to note that Nick went into the room and told the women how he felt before crying and quickly leaving, without giving them a chance to respond. It’s also important to note that the thing he’s upset about is the very thing he signed up for, and fans certainly don’t seem to be willing to cut Nick much slack when it comes to his (possible crocodile) tears.

What do you think about Nick’s crying? Tweet us @BritandCo!