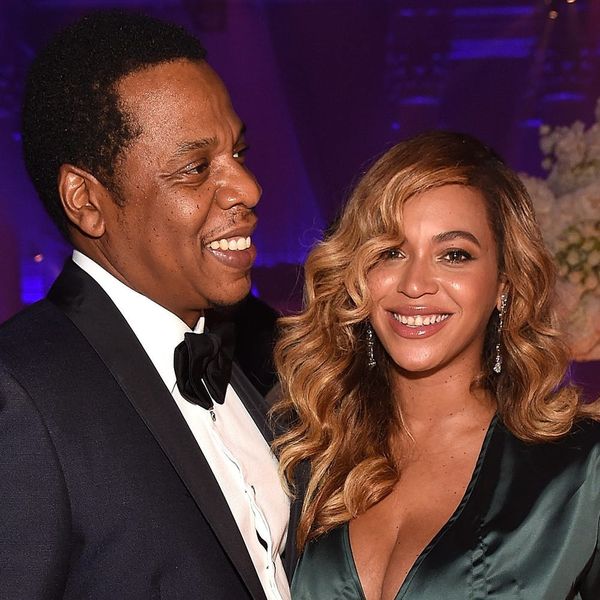 JAY-Z’s just may have reached his music video peak! After delighting fans with an all-black recreation of “Friends” for his visual accompaniment to 4:44‘s “Moonlight,” the rapper is one-upping himself with yet another video from the album with the just-dropped “Family Feud,” and boy, were fans in for a treat!

The music mogul debuted his latest masterpiece Friday night on his streaming service, Tidal. Not only did his wife Beyoncé and daughter Blue Ivy make a cameo in the vid, they were accompanied by the likes of Jessica Chastain, America Ferrera, Rashida Jones, Mindy Kaling, Black Panther‘s Michael B. Jordan, Thandie Newton, Moonlight‘s Trevante Rhodes, Constance Wu, Brie Larson, and Rosario Dawson — just to name a few — all directed by A Wrinkle in Time‘s Ava DuVernay.

The video opens sometime in 2444, with Jordan walking up a set of stairs ranting and raving about a lack of respect before opening the door upon a sleeping woman.

While the video is only available for full viewing for Tidal members, video clips on Twitter also make out a scene featuring Newton, Jordan, and Moonlight’s Trevante Rhodes caught in a dramatic love affair.

The footage later cuts cuts to a round table of women discussing how the country is fractured in 2050, making comparisons of America to a family and saying, “nobody wins when the family feuds.” We also see JAY-Z and Blue Ivy entering a church in the present day, with the music mogul confessing his sins to pastor Bey.

Sneak peeks were posted by the video’s stars, such as Jones, who shared a pic of the all brilliant women seated at the rapper’s round table, including Niecey Nash, Janet Mock, a still-pregnant Mindy Kailing, Rosario Dawson, Susan Kelechi Watson (playing a grown up Blue Ivy in the future), and Constance Wu.

Nobody wins when the family feuds... Find out why this boss ass crew comes together. Watch on @tidal now. #jayz @ava

The women act as the future leaders of America, with Watson saying, “”Ladies, this is just like the 13th Amendment” (an obvious nod to DuVernay’s award-winning documentary, 13th, about the prison-industrial complex.) “Some people have their liberties, and some people don’t. America is a family and the whole family should be free.”

Ferrera shared a snap of herself all dressed up in tribal garb, saying, “My true inner self got to shine,” while Chastain showed off a shot of herself alongside “President Omari Hardwick” and “Madama President” Irene Bedard.

Nobody wins when the family feuds

DuVernay explained some of the narrative she created in the epic vid, tweeting, “The first scene focuses on errors,” “All families hurt each other. Mistakes are made. Expectations unmet. Jealousies fester.” She goes on to call Jordan a “Black Jedi knight,” and that the video helps explain that change sometimes, “requires force,” before sharing her vision of “the founding mothers” — Jones et al — seated at a table making plans for the future of our nation.

I'll let the final scene just stay where it is. In the film, with that family. Being their brilliant, black, brave, bold selves. May we all fortify our families. Our communities. Our society. In whatever ways we can. Much love. And thanks for watching #FamilyFeudFilm! xo. A. pic.twitter.com/r6yWsiJX6f

With her final scene, DuVernay explains that the scene between the rapper and his wife, dressed regally in church, represents the father of three’s confessions to his family, and to the world, to make amends for his mistakes.

Have you checked out JAY-Z’s newest video? Tell us what you think @BritandCo!

Kat Armstrong
Kat has been a writer, social media maven and mom for longer than she's willing to admit. She's also spent time in front of and behind the camera, interviewing celebs, politicians and acting as a producer for fashion and artistic photography shoots. When she isn't writing for various orgs and publications, she's hanging with her kids, husband and French Bulldog, Peter, in Toronto, Canada.
Beyonce
Music
Beyonce Celebrities Music