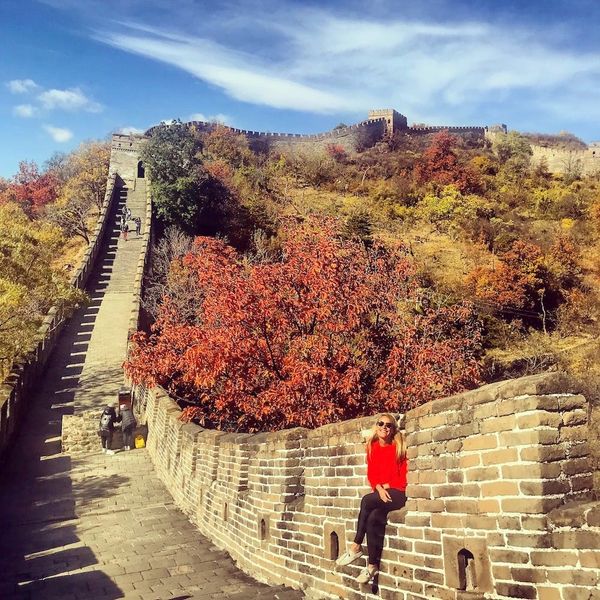 The sky was a vibrant blue when I awoke in Beijing. It was the last day of my trip and, though I was still experiencing jetlag from my flight from New York City a week earlier, I awoke even earlier than usual. Too excited to sleep, I watched the sun rise over the Wangjing Soho, a Zaha Hadid building outside the window of my hotel room in the Chinese capital. Today was the day I would be seeing the Great Wall of China.

I was staying at the Hyatt Regency Beijing Wangjing, a sophisticated hotel that blends modern architecture with traditional Chinese influences, a fusion of old and new that reflects the ever-evolving city itself. The indoor bamboo garden, combined with the evocative art of Chisa Imamura (whose reflective “phenomenal of water” resembles droplets of rain), makes the space to resemble an urban forest. It’s a serenely elegant oasis within Beijing’s bustling Koreatown neighborhood.

Today, the hotel was organizing our trip to one of the most famous sections of the Great Wall: Mutianyu. Located roughly an hour north of Beijing, this mountainous region in Huariou offers iconic vistas of the Great Wall.

When I ascended in a chairlift that morning up to the Great Wall, one that had once carried Bill Clinton, I listened to the history and legends of the 3,000 years of history of the Great Wall.

I looked out the window of the chairlift headed to the top of the mountain and appreciated the sweeping views of the countryside. The smog had followed me from Xi’an to Beijing, and I hadn’t seen the sun since I’d arrived.

Chuck Zhang, the marketing communications manager of the Hyatt Regency was joining us on our tour today, and it would be the first time he had actually seen the Great Wall, despite having grown up in China. Though I was incredulous, I couldn’t recall the last time I’d visited the Statue of Liberty, or even if I ever had at all — I’m assuming on a school trip, but who knows?

Perhaps these monuments are too close to our lived experience (geographically and historically) to be appreciated as locals. The story too much your own to value it. One thing we did value, however, was one another.

“Do you think this will beat the record of Kylie’s selfie?” Chuck asked, holding up his iPhone for a picture.

We had become immediate best friends. The friendships I made in China were nothing short of life-affirming, a contrast to the life-denying historical sites I explored, whose very age and size seemed to announce that they would outlive me. Case in point: the Great Wall, which would stretch from NYC to LA and back on American soil.

The three most dramatic times of building occurred in the 7th century B.C., when the wall was built to protect the warring Chinese kingdoms from each other; 21 B.C., when Qin unified China and linked the wall for the first time; and 2 A.D., during the strife of the Hun Dynasty.

Though I’m usually woefully underwhelmed by museums, somehow, the history came alive to me at the Great Wall. This sense of scale extends to the entire Chinese culture, in my opinion. We may worry about what our grandparents think of us, but in China, you’re worried about ancestors. I was overwhelmed by the feeling of history, by the vastness, by the sheer fact I was on the other side of the world, in China, in the very spot I’d always dreamed I would one day be.

But, when I asked for my picture to be taken, to preserve this moment, I felt instantly sad. This was my big reveal, the bucket list, millennial experience preserved for posterity on Instagram and shared across every possible social media. Looking at the picture, I felt small and trivial. The Wall looked smaller in the picture, and I did too. By freezing the moment, I felt it slipping away into the past somehow. I felt its impermanence, my own impermanence.

Walking towards the toboggan, to ride down from the Great Wall (which is as thrillingly fun as it seems), I felt a wave of anxiety wash over me. Would I ever be in this part of the world again? How lucky was I to be there at that moment, was I savoring it correctly?

Though now it’s relatively easier to visit China, Hyatt’s expansion into the country — along with the knowledgeable, friendly staff at Hyatt Regency Beijing Wangjing and Grand Hyatt Xi’an to schedule outings and translate — definitely helps. After the paperwork of coordinating my tourist visa (not as hard as it sounds, and certainly not as hard as Yelp reviewers made it seem, as always), and the hectic atmosphere of Chinese airports, the Hyatt properties felt like a welcome taste of home overseas.

When everything else felt so chaotic and surreal, it was nice that I had people who (literally) spoke my language. Or, rather, listened patiently while I attempted to speak theirs. (Though I did finally master, Tsieh Tsieh, which means thank you, and is the number one phrase you should know, of course). Things weren’t quite so lost in translation.

It’s trendy to mock the idea of a “bucket list,” like it’s all about ticking off some aspirational goals to show off to your frenemies and friends. But when it’s a feeling that predates the term “bucket list,” I say: Run towards it.

You will be happy you did. Well, I don’t know if happy is the word, but you will feel whole. And that whole may be smaller than you think, and maybe that’s perfectly okay. Better than okay, even. Human.

RELATED: The Pride of Africa: Why Now Is The Time to “Come Home” to Kenya

Katherine Parker-Magyar
Katherine is a freelance writer focusing on travel, culture, lifestyle, and politics. Her work has appeared in The Week, Tasting Table, Elite Daily, POPSUGAR, and Electrify, among other publications. She's traveled to all 50 states and 40 countries, but calls New York City home. Follow along on Instagram at @katherineparkermagyar or visit her website at www.katherineparkermagyar.com.
Travel
Travel
Travel Vacation
More From Travel