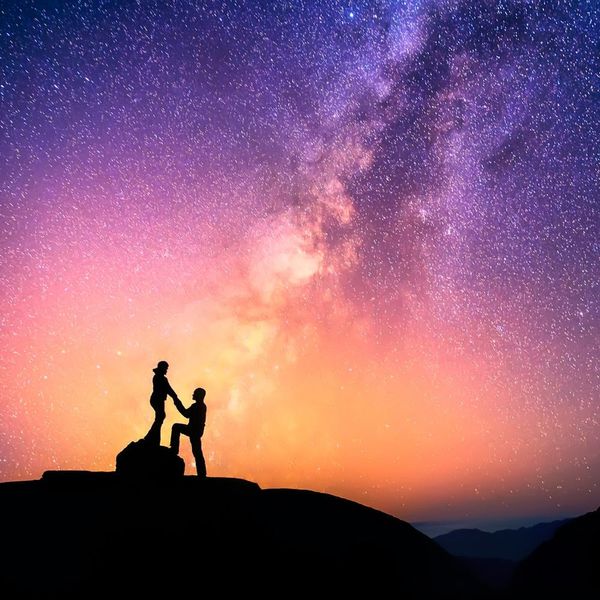 Nowadays, there are a million ways to apply your zodiac sign to your life. You can choose makeup by your zodiac sign, the best pet for you by your horoscope and even the perfect juice recipe for your sign. So it makes sense that you can use it to interpret the compatibility of your relationships too. But where does your sign even come from? We chatted with Ally Mead, a psychic medium and astrologer with more than 30 years of experience, to get the lowdown on astrological signs, love and the relationship between the two.

Your astrological sign is determined by the position of the sun at the moment of your birth. This is the most general categorization, but Ally says that there are tons of details that can also contribute to your sign and horoscope, such as the position of planets and asteroids. “Your zodiac is essentially a snapshot of the sky at the moment of your birth,” she explains. “There are quite a lot of forces at play determining your astrological sign.”

Ever wondered why your sign correlates with certain personality traits? For example, why are Leos known to be enthusiastic and Scorpios so powerful? These answers can actually be found in ancient mythology and astrology. In Greek, Roman and Indian cultures, different mythological characters were associated with particular times of the year, like Aphrodite with autumn. Over time, the traits of these characters, such as Aphrodite’s romance, were projected onto zodiac signs corresponding to those certain times of year. This, for example, is why we consider Libras (late-September to late-October) to be so romantic.

What does that mean for my relationships?

The first place that Ally looks when evaluating relationships via astrological signs isn’t where you would expect. Instead of looking to the stars, she first looks to the math behind an astrology chart. “Astrology is the best way I know to talk about timing,” Ally says. “Every planet can be measured and calculated.” An astrological chart is divided into 12 sections, with one for each sign. The interactions and angles between these signs — 180 degrees for across the chart, or conjugations right next to each other, for example — correlate to the angles between planets in the sky. According to Ally, these angles and interactions determine personality factors — and therefore, are a great indicator of compatibility within a relationship.

Although these interactions are important to Ally, she primarily focuses on what her clients’ zodiac signs are as a means of understanding what they need from a relationship. That means that you shouldn’t read TOO much into a horoscope that predicts you and your S.O. aren’t compatible based on your signs. Instead, read up on what drives your sign and determine if you’re getting those things from the relationship. And while many of her clients are women looking for love, Ally says that her readings almost always strike a positive note. “I haven’t seen a chart yet that says, ‘I’m a doormat,’” she says.

Have you read up on the correlation between your sign and your S.O.’s? Tell us about it @BritandCo.

Gabrielle Gresge
Gabrielle Gresge is a Chicago native and journalism student at the University of Missouri. While not chasing deadlines, she enjoys giving campus tours, exploring her new home, and missing her old one. She loves to write about these experiences in her own handwriting at gabriellegresge.wordpress.com.
Zodiac
Relationships
Zodiac
More From Relationships