4 Expert Tips for Curating the Prettiest Bookshelves EVER 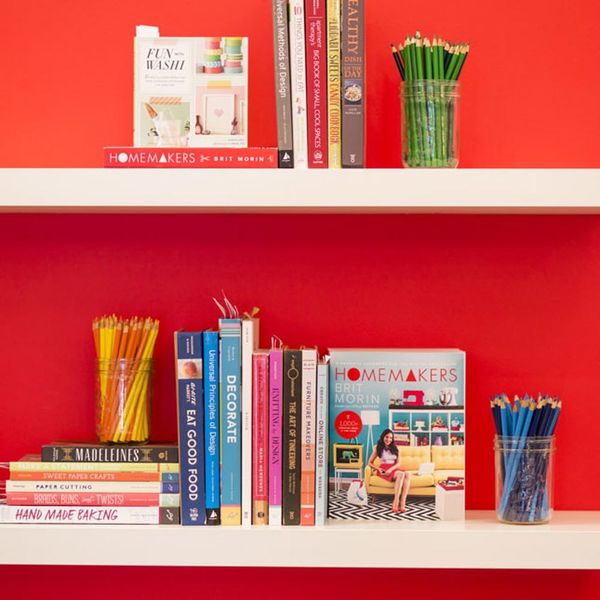 As the head of the Amazon Books Team, Sara Nelson readsa lot. “Everyone on the team reads at least two books a week cover-to-cover, but we ‘read’ dozens of other books during the month. I like to say I’ve read 25 pages of everything,” she tells us. “My team reads the way most people do: We start more books than we finish.” Her job is to share the books she loves most with readers, crafting features such as Amazon’s Best of the Month lists, or 100 Books to Read in a Lifetime series. Because Nelson is a professional reader — literally — she knows a thing or two about organizing bookshelves, something she has to do on a regular basis at home. She’s sharing some of her best tips with us.

Find a System That Works for You

“My system changes all the time,” Nelson says. A pro tip from her experience: Alphabetizing isn’t the best way to go. “It became very unwieldy as I got more books and suddenly there weren’t openings on the right shelves,” she says. After a lot of experimenting — Nelson played around with organizing books by size, meaning and genre all at one point or another — she found a way to organize her bookshelves that looks pretty and makes sense. “My husband will hate that I’ll admit to wanting the shelves to look pretty. But I do! But I also want to keep all books by one author together, to allow for some sort of logic or order, even if it’s a logic or order that only I can follow,” she says.

A book collection is personal, so it makes sense that a personalized system that varies reader to reader works best. Nelson says she knows exactly where every book in her house is located, even though an outsider would be mystified. If you really do want to have everything in alphabetical order, Nelson offers these words of wisdom: “Leave some open space on the shelves — put objects or pictures in the holes — so that as you add books, you can rearrange the objects or pictures to make room for them.”

Display Books That Match Your Personality

“People always ask me if I’ve read all the books on my shelves and I answer that the ones on my shelves are largely the ones I want to read,” Nelson says. It gives guests insight into her personality by tipping off the things she currently has front of mind. But there are other ways to use books to be an extension of yourself, such as putting your old favorites front and center, or the ones you’ve most recently read. One thing Nelson does shy away from is putting out books she hasn’t read — and doesn’t want to read — just because the cover is pretty. “I don’t think I’ve ever bought or displayed a book just because it has a pretty cover, but I think it’s a bonus when they do.” she says.

For practical purposes, it makes most sense to stack what you’re currently working through right next to your bed, especially since it’s the most personal part of the house. “My bedside table is a mess,” Nelson admits. She also places what she wants to read next on her bedside table, but if the pile gets too high, she transfers them to the bookshelves.

When it comes to the most prominent placement of all, the coffee table, Nelson uses this space to spread out her magazines. Since magazines are read much faster and don’t stack as well on bookshelves, this not only looks nice, but also makes practical sense.

When it comes to organizing your reading material, Nelson’s number one tip is: Be flexible. “You’re going to continue to accumulate more books over time, so your organization system will probably change,” she says. Her other biggest tip: Be ruthless. “I have had to give up the idea of keeping two or three copies of a favorite book (one to keep, one to loan and one just in case of something or other). I’m learning to whittle it down to one (okay, two sometimes). It’s easier to do this now that we have backup in the form of digital books; knowing you can always keep something on your Kindle relieves a lot of pressure,” she says.

How do you organize your books? Speak up in the comments.

Emily Laurence
Emily is a contributing writer for Brit + Co and former teen magazine editor. She lives in New York City, where she's on a mission to find the most delicious mocha in the East Village.
Books
Home
Books Living Room
More From Home