16 New Books to Read This September 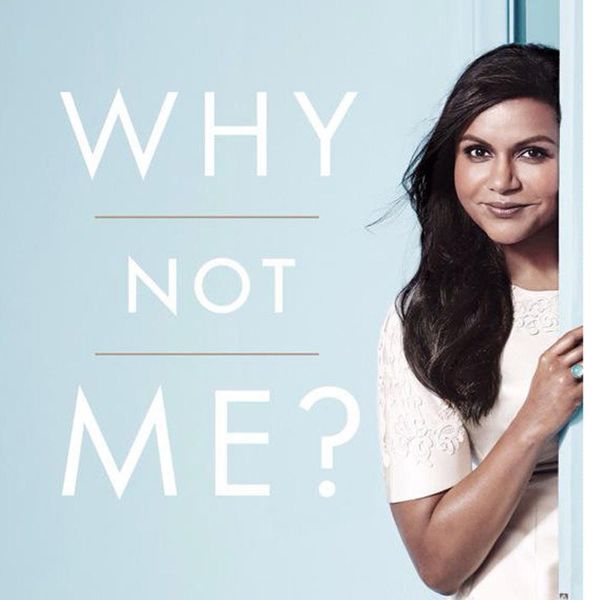 September is all about fresh starts, and if you’re looking for life advice, this month’s book picks are full of it. Whether you want it with a dose of humor (Mindy Kaling), from someone who is living the dream (Elizabeth Gilbert) or from a fictional character who totally gets you, there’s at least one book on this list that will make you think about your life in a new way. Even if you aren’t going off to school, there’s never a bad time to reinvent yourself!

1. Why Not Me? by Mindy Kaling ($16): The wait is finally over. Mindy fans have been anticipating the actress/writer/superwoman’s next book since the release of her last one, Is Everyone Hanging Out Without Me? In this collection of personal essays, she offers up more hilarious yet poignant stories straight from her own life about fame, friendship, style, body image and boys. And if you finish the book wanting more, not to worry — she’s gearing up to release another book, co-authored with her best friend/sometimes boyfriend, BJ Novak. (out September 15)

2. Big Magic by Elizabeth Gilbert ($14): Beloved Eat, Pray, Love author Elizabeth Gilbert is back, this time with a non-fiction book full of tips on turning your dreams into reality. She shares ways to embrace your curiosity, which can take you on unexpected adventures that could change your life. (She would know, right?) If you want to know what living a creative life really looks like, this book is a must-read. (out September 22)

3. Me, My Hair And I by Elizabeth Benedict ($14): Whether your hair is fine, kinky or absent, it’s a huge part of your identity. More than any other part of the body, perhaps, hair tells your cultural and personal history. Elizabeth Benedict’s collection of essays shows just how true that is with this new anthology, including pieces by Jane Smiley, Anne Lamott, Rosie Schaap and more. (out September 29)

4. This Is Your Life, Harriet Chance! by Jonathan Evison ($19): You’re never too old for a new adventure. This is especially true for 78-year-old Harriet Chance, who sets out on an Alaskan cruise shortly after her husband dies. What’s aboard is way more than an all-you-can-eat buffet; the widow has a “chance” run-in with her estranged daughter and uncovers some big surprises about her past. Talk about rocking the boat. (out September 8)

5. Purity by Jonathan Franzen ($15): If you’re hipster or high brow, Purity needs to be on your fall reading list. The lauded author’s new novel is about a millennial searching for who she really is. Saddled with six figures in student loan debt and squatting with a group of anarchists in Oakland, she thirsts for a normal life, but with no family, can’t imagine having one. Hooked yet? (out September 1)

6. Meatspace by Nikesh Shukla ($12): Going through a quarterlife crisis? You’ll relate to Kitab, the protagonist in this enjoyable novel. Kitab is having a rough time. His girlfriend dumped him, he gets fired for focusing on writing a novel instead of doing his job, and now his novel isn’t selling. Things take a turn when a stranger shows up at his door proclaiming they’re meant to be friends. Prepare for things to get weird. (out September 15)

7. Finding Forever by Ken Baker ($7): What would a book roundup be without a juicy YA novel? This one comes courtesy of E! News correspondent Ken Baker. If there’s anyone that knows drama, it’s him. Finding Forever is about a teen named Brooklyn who runs a blog called Deadline Diaries, exposing Hollywood’s hookups, breakups and screwups. But when she’s not solving Hollywood mysteries, she’s experiencing the same struggles as every other teen: heartbreak, family problems and figuring out who she really is. (out September 8)

8. The Epic Adventures of Lydia Bennet by Kate Rorick and Rachel Kiley ($9): Over 250,00 people subscribe to The Lizzie Bennet DiariesYouTube channel, and the popular series has now spawned a novel. Narrated by a 20-year-old named Lydia who is bored with her sleepy town and turns to vblogging for entertainment, the crux of the novel explores what is really means to discover who you are while navigating the digital world. (out September 29)

9. Juniors by Kaui Hart Hemmings ($14): Another buzzy coming-of-age novel out this month is Juniors, written by the author of The Descendants. The book is about a teen named Lea who is half Hawaiian. Lea moves around a lot and never feels like she fits in. When she starts the year at an elite private school, she’s surprised to find herself fitting in perfectly. But while she’s happy to fit the mold of the upper-crust world, she wonders what parts of herself she’s giving up in the process. (out September 22)

10. Girl Waits With Gun by Amy Stewart ($15): Amy Stewart will hold you hostage with this addictive new novel. Based on true events, this book tells the story of the first ever female sheriffs. Set in 1914, the novel follows Constance Kopp, who is estranged from her family and not interested in starting one of her own, making her a bit of a loner. But this badass broad will have you cheering. (out September 1)

11. Gold Fame Citrus by Claire Vaye Watkins ($15): Set in California in the near future, this novel casts an ominous glow on present-day events. Most people have fled the water-thirsty land, but a group of squatters remains and two renegades find love in a hopeless place. Can they build themselves a better future while remaining true to who they are? No spoilers here. (out September 29)

12. Everything, Everything by Nicola Yoon ($11): Talk about an unconventional love story: Maddy is allergic to the outside world, literally, but she can’t resist the cute boy next door, Olly. Olly opens up a whole new world for Maddy, but there are plenty of bumps along the way. It will have you thinking about what might be holding you back from adventures you could be having. (out September 1)

13. After You by Jojo Moyes ($15): In this sequel to Me Before You, you can expect another complicated love story. Lou is home with her family recovering from a horrible accident, and no, she’s not happy to be home. But her family changes her in ways she couldn’t expect, and so does a new man who enters her life when she needed him to most. (out September 29)

14. Tonight The Streets Are Ours by Leila Sales ($10): Have you ever taken on more than your fair share and then resented people for it? That’s how teenaged Arden feels all the time. She gives to her family. She gives to her friends. And she feels completely taken for granted. When she stumbled across a blog that seems to voice exactly how she feels, she decides to go on a road trip to meet the man behind the words. Adventure awaits. (out September 15)

15. The Weight of Feathers by Anna-Marie McLemore ($10): Imagine Romeo & Juliet set with a circus backdrop. That’s kind of what’s going on in The Weight of Feathers. Two rival traveling performing families are brought together in an unexpected way when tragedy strikes. The son of one family saves the life of the daughter from the other. Maybe humanity isn’t so bad after all. (out September 15)

16. I Crawl Through It by A.S. King ($10): This novel tells the story of four teens who are just trying to keep their heads above water. They are so anxiety ridden that they will do anything to escape the lives they live now. No matter what the consequences. This book explores coming of age in ways you never imagined before. (out September 22)

Which book are you most excited to read? Sound off in the comments.

Emily Laurence
Emily is a contributing writer for Brit + Co and former teen magazine editor. She lives in New York City, where she's on a mission to find the most delicious mocha in the East Village.
Books
Home News
Books