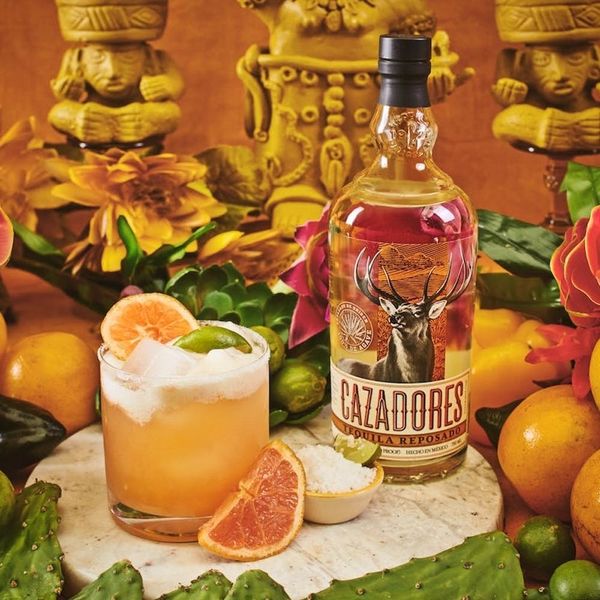 Everyone has their own associations with tequila (maybe it takes you back to an unforgettable spring break trip), but more often than not, people tend to use it in the same sentence as shots and regret. Tequila Cazadores Master Tequilier Tania Oseguera, a native to Guadalajara, Mexico, is here to debunk all myths about it and celebrate this authentic piece of Mexican culture. “It’s a fun spirit, and is meant to be,” she says, “And you can enjoy it however you prefer: in margaritas, neat, or in a good cocktail. The only strict rule is that you learn how to drink it neat first, sip by sip. After that, you can mix it with whatever you prefer.” Oseguera told us more about how to create the perfect margarita and how she rose to the top of her ultra-competitive field with this important honor.

Brit+Co: How did you get into the food and beverage industry, and what was the process of becoming a master tequilier like?

Tania Oseguera: Originally, it wasn’t my idea to be in the food and beverage industry — I studied to be a cultural journalist here in Mexico. I thought companies would be fighting to hire me after I graduated with honors, but that wasn’t the case. I worked as a promo model for a while after that, but always had the desire to work in a different field, one that wouldn’t just depend on looks. After several years, I heard about a casting for Tequila Cazadores, looking for Mexican girls. They were searching for bilingual, educated girls who could travel around the US promoting the brand. I was selected out of over 200 girls at the casting to become the spokesperson for the brand. I then got my MBA in marketing, began leading distillery tours, and later trained and got my certification as a tequilier from the Mexican Academy of Tequila. At that time, I was traveling three weeks out of the month in the US. But once I had two children, I asked to change my home base to my hometown of Guadalajara. Now I take international groups to the Cazadores distillery in Jalisco, take them through the highlands where the agave is grown, and give them a proper tasting. I love this brand because it reflects a Mexico that’s open to the world: It’s well-known locally but is growing internationally too.

B+C: What are some common misconceptions people have about tequila that aren’t true?

TO: Many people assume that all tequila is made to be consumed only as shots. Cazadores is made with agave only from the highlands of Jalisco. It’s a plant that takes six years to mature, and it ferments to the sounds of Mozart music — so it’s worth taking the time to really enjoy the high-quality spirit. It is highly regulated as well to ensure that quality. In our distillery, we have one person from the Tequila Regulatory Council checking up every day, and there are drones from the Regulatory Council flying above us every day to observe production. That’s how you know you have a real premium spirit.

Cazadores also makes tequila with a strong commitment to sustainability. We source energy from the agave plant itself, by burning the residual fibers of the agave to turn into vapor. The distillery is also powered by solar tube systems; we’re really committed to reducing our carbon footprint in any way possible.

Also, another myth: Strangely, some people think tequila comes from the cactus plant instead of agave.

B+C: Can you explain the difference between a couple of the major kinds of tequila?

At Cazadores, we age our tequila in oak barrels — and the oak adds nice flavor notes to the tequila, like vanilla, almond, and chocolate. We always use new barrels, so that the tequila won’t acquire the tastes of other liquors that have been stored in the barrels.

B+C: So what’s your secret recipe for a perfect margarita?

TO: The first thing you need to make a really good margarita is 100 percent agave tequila — like reposado, which has a subtle vanilla note. If it’s going to be used in cocktails, people think it’s okay to use any tequila because they think you won’t really taste it, but that’s not true at all. You need also need fresh lime juice, and a good orange liqueur for added flavor.

B+C: What are some other creative uses for tequila?

TO: It’s being used more and more in cuisine; I really like tequila shrimp — using tequila as a substitute for white wine when cooking the shrimp. There are also chocolates filled with tequila and a milk candy called borrachitos that have a tequila flavoring.

There are so many more uses, but the bottles are also popular as collector’s items. Many people in Mexico create works of art with giant tequila bottle walls in art galleries, restaurants, and in private home collections.

RELATED: 4 Women Who Are Leading the Way in the Wine Industry

From Your Site Articles
Mara Santilli
Mara Santilli is a freelance writer based in New England. Her work has appeared in several publications, including Shape and Marie Claire. When she isn't writing, she can be found munching on any piece of dark chocolate she can get her hands on, plunking out her favorite acoustic songs on the guitar, and finding the cheapest Broadway tickets possible. Follow her adventures on Instagram to see where she's headed next.
Drink
Food Adulting
Drink
The Conversation
More From Food Adulting