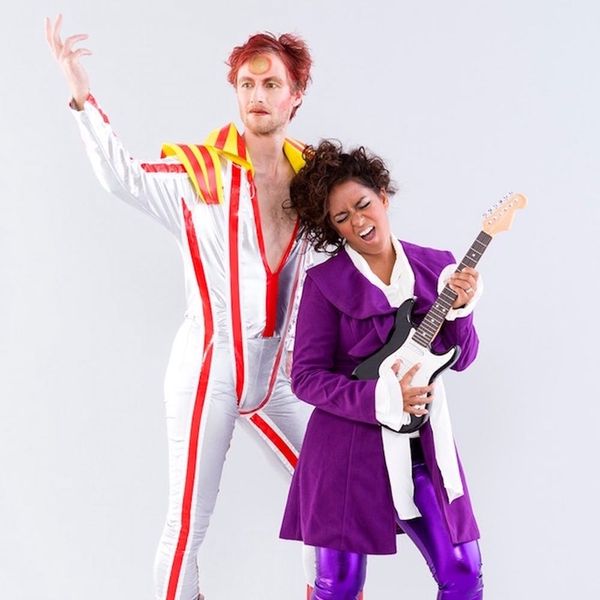 Now that the New Year’s hangover has (almost) worn off, it’s time to reflect and do some real talk. 2016 was a year of surprises, and there’s a high chance you want to say “F*** YOU” or at least “R.I.P” to some of the people, trends and defining music moments that made 2016 so, well, controversial. Whether you were a David Bowie fan or a political enthusiast, or maybe Star Wars had a special touch on your life, this is the party to let it all go. Kick off the year with a Donald Trump piñata, chow down on some Pokémon Go cupcakes and slay the dance floor with a killer Beyoncé costume. Celebrate the good, the bad and the ugly with this one-of-a-kind party that celebrates all of 2016’s questionable highlights.

There’s no better way to honor the British rock idol than with these adorable printable cards. Print off a bunch and use them as invites to your R.I.P party or stick them right to the walls as party decor. (via The House That Lars Built)

This was the year we lost David Bowie AND Prince. Yep, it was almost too much to bear. Forget Halloween and use this R.I.P party to honor your fave musicians with these super fly DIY costumes. (via Brit + Co)

Queen Bey slayed this year in every way imaginable: She debuted her new album Lemonade, sold out her “Formation” tour and became the year’s top Grammy nominee. Skip the traditional New Year’s headbands and DIY a whole bunch of these for your party’s photo booth. (via Brit + Co)

A simple headband not enough for your Beyoncé-lovin’ heart? We understand. Pull out the glue gun and a bag of craft jewels: This disco-ball inspired costume was practically made to kick off 2017. (via Brit + Co)

It’s only fair to honor her Worship-fulness Carrie Fischer in edible form with these adorable sugar cookies. Practice your piping skills to get the perfect outline for her hair and face with stiff icing, then fill them in with runny icing. Cue the tears and Star Wars theme song… (via I Heart Baking)

6. zeroUV Aviator Sunglasses ($11): Look up any photo of ’80s pop icon George Michael, and you can bet he’ll be rocking a pair of classic aviators. Pay homage to everything ’80s and hand out pairs of black aviators to your guests as photo booth props and favors.

If you’re looking for other party favor ideas, why not laugh about iPhone 7’s lack of a headphone jack — drama, drama! — and give your friends a leather cord keeper to store their now useless headphones. (via A Beautiful Mess)

Brangelina is no longer Brangelina and now Angelina is removing her Brad Pitt tattoo. What is this world coming to? Whether you were team Aniston or Jolie, why not make a batch of funny tattoos to commemorate the saddest breakup of the year with this easy DIY. (via Persia Lou)

And if you didn’t have enough to worry about yet, Zika terrorized the Rio Olympics and then gave everyone else a good scare as it came into other parts of the world. Say *F you* to those awful mosquitos and add some glow to your party with a few DIY citronella candles. (via Sugar & Charm)

10. Piñatas.com Donald Trump Political Piñata ($80): Let your friends literally bash one of the most controversial presidential candidates! The best part? His head is hollow and comes pre-filled with nothing. Which is totally on point.

These baby costumes might just be the BEST part about the whole 2016 election. Seriously, those mini wigs are pretty much the cutest thing ever… even Trump’s! (via The House That Lars Built)

This was the year Leo FINALLY won an Oscar. See, it wasn’t all bad in 2016. Show him some love and add some sparkle to your party with this Oscar’s-inspired DIY gold tinsel chandelier. (via Brit + Co)

This sensational momma went viral with her contagious laughter and total joy while she raved about her fab Chewie mask. In a time of so much stress and controversy, this is one lady who made 2016 much more bearable with some light-hearted chuckling that everyone can appreciate. (via Brit + Co)

Don’t put away those Christmas lights just yet! If there was one show that completely saved this year, it was Stranger Things. Recreate the wall of lights at your party with layers of these DIY paper lights… and maybe add the word “run” for an extra spooky addition. (via Studio DIY)

Remember when a selfie was just a pic of your face? Thanks to Snapchat’s AMAZING filters, you can be everything from a Greek goddess to a puppy dog and a bumblebee with the swipe of a button. Thank you, 2016. (via Brit + Co)

According to Google, Pokémon Go was one of the most searched topics this year — seriously, everyone wanted to be in on it! Whether you’re still playing or you deleted the game a long time ago, say R.I.P to that trendy game with these tasty cupcakes. (via Brit + Co)
Kate Thorn
Kate Thorn is an illustrator, foodie, photographer, and blogger at Create & Kate. She loves creating art, traveling, and all things chocolate. A native to the Great Northwest, she is currently living in London and pretending to be a mature grad student.
Halloween
Party
Halloween new year New Years Eve NYE Party Decor Party Ideas
More From Party