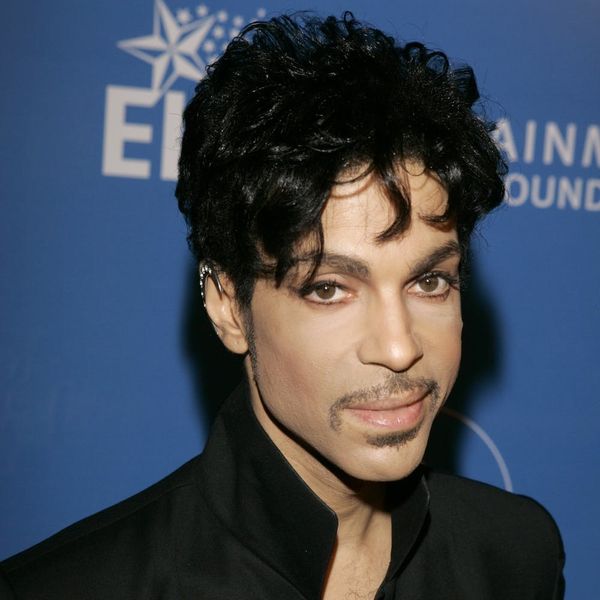 2016 was teeming with new life, with what seemed like a complete and total celebrity baby boom — just check out these nine super memorable pregnancy announcements for proof! Yet, for every new addition bestowed upon us, it seemed as though we lost an old familiar face in a beloved celeb. Celebrity deaths occur every year, but 2016 seemed especially brutal, taking some of our brightest and most revered stars. We’re taking a look back at some of those who may be gone, but never forgotten, by honoring them with our recap of 15 celeb deaths that shook us to the core.

1. David Bowie, January 10: Right from the start, 2016 broke our hearts by taking from us the musical genius that was David Bowie, AKA Ziggy Stardust. The artist passed away following an 18-month-long, largely secret battle with cancer, and our worlds have all been duller for it since. From his turn as Jareth the Goblin King to his penchant for killer cat photos, he truly was a magical unicorn that we’ll forever miss. (Photo via Tim Mosenfelder/Getty)

2. Alan Rickman, January 16: Right on the heels of Bowie’s death came more heartbreaking news, as Alan Rickman also passed away due to cancer. The actor beloved for his role as Professor Snape in the Harry Potter films and remembered (if not quite as fondly) for breaking Emma Thompson’s character’s heart in everyone’s favorite (or not-so favorite) holiday flick, Love Actually, was mourned by fans the world over. And they weren’t the only ones feeling the blow of his death: the entire HP crew, including JK Rowling, Emma Watson and Daniel Radcliffe, took to social media to share their pain. (Photo via Desiree Navarro/WireImage/Getty)

3. Abe Vigoda, January 26: Though actor Abe Vigoda had countless memorable film roles in his lifetime, we’ll always remember him best as the lovable grandpa from Look Who’s Talking (one of our childhood faves) that lets out a hearty laugh as baby Mikey pulls at his eyebrows. His death, peaceful as it was in his sleep, felt like losing a grandparent of our own. (Photo via Jim Spellman/Getty)

4. Chyna, April 20: Though her passing was largely overshadowed by that of the much-loved musician Prince, who died just one day later, former WWE wrestler Chyna’s death was certainly noteworthy: She was the first and only woman to ever hold the WWF Intercontinental Championship. In short? She was a #GirlBoss in a traditionally male-dominated industry, and for that, we give her our utmost respect. (Photo via Michael Stuparyk/Getty)

5. Prince, April 21: Whether you knew him as Prince Rogers Nelson (his given birth name), just Prince, The Artist Formerly Known As Prince, the love symbol or something else entirely, His Purple Majesty’s death wasn’t one we’ll soon be forgetting. The 57-year-old musician’s fanbase reached far and wide, thanks to not only a slew of hits spanning more than four decades, but his trendsetting tendencies in the worlds of fashion and art, to boot. (Photo via Chelsea Lauren/Getty)

6. Muhammad Ali, June 3: One of the most revered persons to pass this year, Muhammad Ali was honored by no less than 15 celebs following his mid-summer death. Known as both a boxing champion, and, perhaps more importantly, a humanitarian, Muhammad touched everyone from Halle Berry to Justin Timberlake and Ryan Reynolds, in addition to countless anonymous admirers the world over. Often imitated but never duplicated, he truly was the greatest when it came to his craft, and to many, as a human being. (Photo via Stephen J. Cohen/Getty)

7. Christina Grimmie, June 10: In what may have been the most tragic death of 2016 in nature, 22-year-old rising The Voice alum Christina Grimmie was gunned down before her time following a performance in Florida. While many offered their condolences via Instagram, Twitter and the like, it was former coach Adam Levine that was perhaps hit the hardest, offering to pay for the young star’s funeral. (Photo via Jason LaVeris/FilmMagic/Getty)

8. Anton Yelchin, June 19: Less than two weeks after Christina’s untimely passing, tragedy struck again when 27-year-old actor Anton Yelchin was killed in a freak accident involving his vehicle. Stars such as Anna Kendrick and Kat Dennings were heartbroken at the Star Trek actor’s absence in their lives; another blossoming talent taken far too soon. (Photo via Barry King/Getty)

9. Gene Wilder, August 29: Another death that felt like a personal injury was that of actor Gene Wilder. With such a strong connection to our childhoods, our dear Willy Wonka had Twitter pouring its heart out for the man who brought the whimsy of our younger days to life. We can still hear him singing now… (Photo via John Lamparski/WireImage/Getty)

10. Alexis Arquette, September 11: Already a day of reverence for America, which remembered the 15th anniversary of the 2001 terrorist attacks this year, the Arquette family faced extra hardship this year when Alexis Arquette took her last breath on September 11. The second youngest of five, Alexis’s baby brother David Arquette took to Twitter to share a touching tribute to his big bro, “His hero for eternity.” *Tear* (Photo via Amanda Edwards/WireImage/Getty)

11. Janet Reno, November 7: Janet Reno, controversial though some of her professional actions may have been, paved the way for many a woman in office when she broke down government barriers as the first female US Attorney General. With any luck, the path she helped to pave for women in politics will be one that sees a female president taking office sooner rather than later. (Photo via John Kopaloff/Getty)

12: Florence Henderson, November 24: We still can’t believe that Florence Henderson, AKA Carole Brady, is gone. While she will forever live on through the legacy that has become The Brady Bunch, the world seems a little less safe and comfortable knowing we’ll never hear that wonderfully familiar voice exclaim, “Oh, Alice!” ever again. (Photo via Amanda Edwards/WireImage/Getty)

13. John Glenn, December 8: As Janet was a pioneer in politics, John Glenn was a pioneer in space, becoming the first American to orbit the Earth, and only the fifth person to enter space’s atmosphere: a fact that seems crazy in 2016, when more than 530 have accomplished the feat. Later a politician himself with a seat in the Senate, he received the Presidential Medal of Freedom from none other than President Obama in 2012. May we all aspire to lead such eventful and celebrated lives! (Photo via NASA/Getty)

14. Alan Thicke, December 13: If Carole Brady was America’s TV mom, Alan Thick was its dad. The patriarch of Growing Pains for the entirety of the show’s seven seasons, plus its two subsequent movies, Alan Thicke was practically synonymous with Jason Seaver. While he had other roles throughout his career (including a recent one on Fuller House), it was his stint as the level-headed psychiatrist who played Mr. Mom so that his wife could go back to work — a rather progressive role in the ‘80s — that seemed to have enthusiasts (Candace Cameron Bure included) at a total loss over his sudden heart attack. (Photo via Andrew Chin/Getty)

15. Zsa Zsa Gabor: December 18: Just as it opened, 2016 went out with a bang in the celebrity death department with the Hollywood icon that was Zsa Zsa Gabor. Known just as much for her personal life (she was married nine times!) as she was for her film roles, Zsa Zsa was every bit as famed as Paris or Nicky Hilton in her day (and incidentally, was married to their great-grandfather Conrad at one point). (Photo via Ron Gallella/WireImage/Getty)

Which celebrity death hit you the hardest in 2016? Commiserate with us @BritandCo.

Nicole Briese
Nicole is the weekend editor for Brit + Co who loves bringing you all the latest buzz. When she's not busy typing away into the wee hours, you can usually find her canoodling with her fur babies, rooting around in a bookstore, or rocking out at a concert of some sort (Guns N' Roses forever!). Check out all her latest musings and past work at nicolebjean.com.
new year
Celebrity News
new year
More From Celebrity News