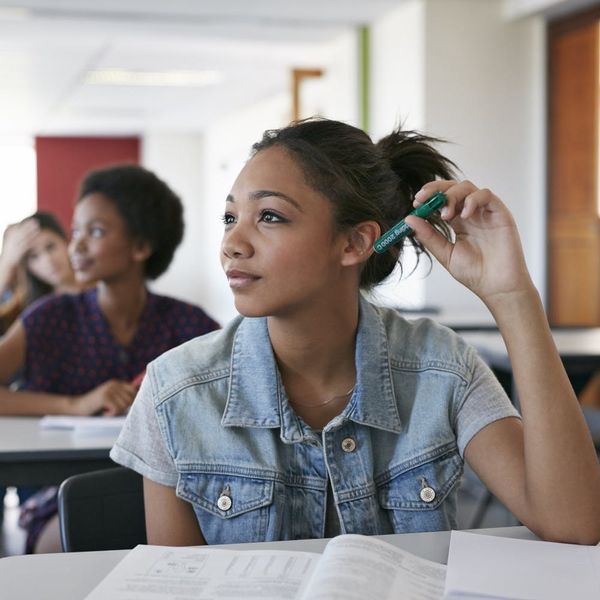 With summer winding down, college students are thinking about getting back to class. But for low-income students, getting a college degree often presents a tremendous financial burden that isn’t eliminated by financial aid or scholarships. But thanks to a grassroots fundraiser on Twitter, almost 400 low-income college students will have more financial support to start the school year off this September.

The fundraiser, called the #TwitterTrunkParty, began with a tweet from prison abolitionist organizer and educator Mariame Kaba in late July. Kaba tells Brit + Co that every year during back-to-school time, she supports a handful of students who need money for supplies and, this year, she wanted to see who else would get on board. She put out feelers by way of a Twitter poll to see if people were interested in funding grants for school supplies.

We're about to hit Back to School time in a couple of weeks. i usually contribute to school supply drives because those supplies add up in costs and some kids/families struggle to provide for their kids.

“Folks were really supportive. A lot of people took the poll,” Kaba tells us.

Within a few days, an application for grants was live and students began to apply. Kaba says that her original goal was to secure donors for 275 grants at $250 each, but the response was bigger than she anticipated: At least 300 donors gave a total of $95,750, enough for 383 students to receive grants. Impressively, it all went down in under two and a half weeks.

Kaba tells us that setting up the fundraiser was pretty simple. With the help of freelance writer Sonia Weiser and another woman who volunteered, Kaba put up an online application for students and reached out to people who had committed to donating via email. Donors read through applications and sent the grant directly to the students.

“People have appreciated the simplicity of the model, and being able to immediately know the story of [each] person receiving the funds,” Kaba says.

Students who received grants through #TwitterTrunkParty were quick to post the good news. Some also shared stories of how difficult it has been to come up with the funds they need to start the new school year. One student wrote, “I’ve [applied] to dozens of organizations and scholarships and I didn’t get them because of my grades and #TwitterTrunkParty didn’t care about that, they just wanted to help.”

was so happy finally receiving grant money. i’ve applies to dozens of organizations and scholarships and i didn’t get them because of my grades and #TwitterTrunkParty didn’t care about that, they just wanted to help. that is so precious pic.twitter.com/278KHoY8BF

Kaba says that the stories of many of the stories of students who applied for grants are “heart-wrenching, but also about resilience.” In some cases, parents have recently lost their jobs or died and the family is cash-strapped; in others, students struggled with their grades and couldn’t get scholarships, but still want to go to college. With the added support of the grants, students are now in a better position to afford school, even if other aid institutions have turned them away. Some students have scholarships already, but it’s not enough to cover all the costs.

The feeling when you almost give up but realize someone is looking out for you is unreal. #TwitterTrunkParty pic.twitter.com/tdZHeMfMYB

One of the grant recipients is 19-year-old Paula Whitehead, a pre-med student who has also been independently raising money for school on GoFundMe. Whitehead wrote on her GoFundMe page that she started college last year at Spelman College, but the tuition was unaffordable, so now she’s transferring to the University of East London in England. expenses.

Whitehead tells Brit + Co that it “felt wonderful” to get the $250 grant through the Twitter Trunk Party. Even with two scholarships, the cost of school adds up fast, and Whitehead says she still needs more help to make her education happen.

“I almost gave up on school but with the support that I received over the past day, it gave me hope that I could actually go. I was going to take a year off, get a job, and try again next year,” Whitehead tells us. Though she’s still a little short on her fundraising, “the donations have been steady so I’m hopeful.”

Kaba frequently creates and participates in fundraising efforts both on and off Twitter. Recently, she helped raise tens of thousands of dollars for a monument honoring civil rights activist and trailblazing journalist Ida B. Wells. While she says she sometimes comes up with ideas for fundraisers on the spot, she has a recurring fundraiser coming up this fall.

“Every Christmas season I try to help support various projects for incarcerated and criminalized people.” As she did last year, Kaba will kick off a fundraiser for STEPS to End Family Violence in New York, a program that provides support services to victims of gender-motivated violence. Kaba says that this year there will be holiday wish-lists for people incarcerated at Rikers Island who are part of the STEPS program.

The #TwitterTrunkParty is a perfect example of how much can be accomplished when groups of people come together to help one another out. Hundreds of students will now be able to breathe easier at the start of a new school year, and in a better position to focus on their studies instead of how to pay for school. As Kaba wrote on Twitter Friday afternoon: “We are powerful together.”

Elizabeth King
Elizabeth King is a politics, history, and culture writer based in the Twin Cities. She is generally pretty cranky but still enjoys traveling, music from the early 2000's, and plotting the resistance. Feel free to say hi on Twitter at @ekingc or check out some of her work at www.elizabethcking.com.
Activism
Empowerment
Activism Education Twitter
More From Empowerment