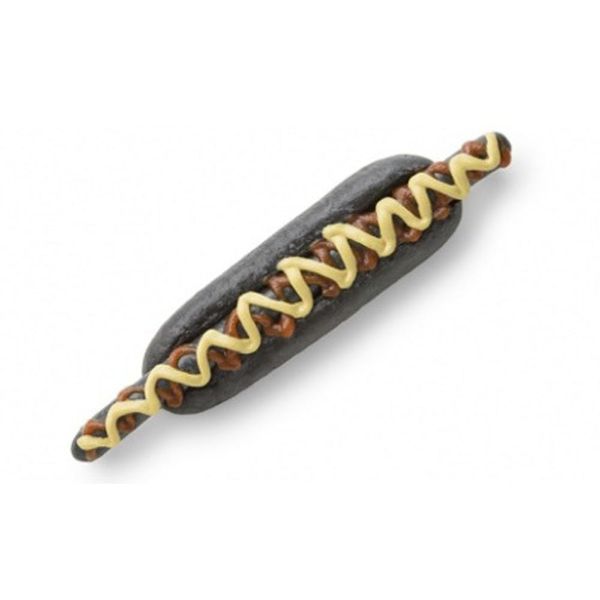 Though the rainbow food trend is still going strong, we’ve begun to notice a little bit of a backlash in the form of foods like, just for example, black ice cream. So while we were just giggling over rainbow sausages, we’re now wide-eyed over jet black wieners. Introducing: IKEA’s “Ninja Dog.”

Named for its resemblance to a ninja scroll (um, okay), the Ninja Dog’s super weird-looking black color comes from edible bamboo charcoal, which not only gives food a deep inky color, but also apparently kills off toxins in the body. With an eight-inch-long bun and footlong wiener, the Ninja Dog will be available until the end of the year, costing a mere 300 yen, or roughly $3 USD.

With no deets on what those criss-crossed toppings are (they don’t quite look like your typical ketchup and yellow mustard) and no info on the taste, we’ll just have to wait in wonder over this peculiar culinary creation.

IKEA Japan also offers more typical hot dogs, as well as hot dogs with scoops of mashed potatoes on ‘em, for the variety-loving wiener-connoisseurs out there.

Would you try the Ninja Dog? Tweet us @britandco!

Desiree O
Desirée O is a ‘Professional Bohemian’ who loves anything and everything related to the arts, entertainment, and pop culture. She ADORES being a ‘Newsy’ for Brit + Co, covering all of the latest tidbits of awesomeness that you want to read about. When she’s not writing, she’s either making messy art, going on long adventurous walks with her camera, or poking around over at bohemianizm (http://www.bohemianizm.com/). You can find out about Desirée O and her work at http://DesireeO.com/ or follow her on Twitter @DesireeO.
Fast Food
Entertainment
Fast Food IKEA