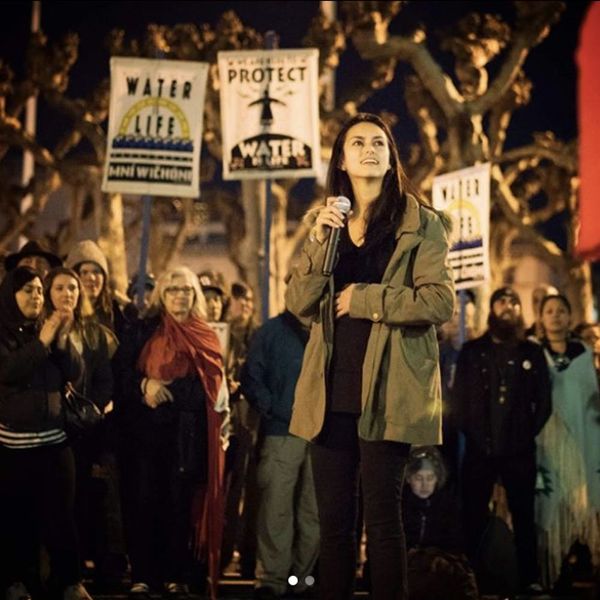 Jackie Fielder quit her full-time job in June 2017. But it wasn’t to travel the world or go back to school, like some other 23-year-olds. Instead, she made a bold decision to join Mazaska Talks, an organization that aims to encourage organizations and individuals to divest from the banks that fund fossil fuel projects, which often adversely affect indigenous communities.

As an indigenous woman herself, Fielder was moved by the #NoDAPL protests at Standing Rock, North Dakota that spanned much of the winter of 2016-2017. But it wasn’t until she left her job that Fielder opted to put her feelings into action. When she watched the Seattle City Council approve an ordinance to end business relationships with Wells Fargo, she realized she wanted to try to replicate that action in San Francisco. Her journey as an activist started in February when she founded the San Francisco Defund DAPL Chapter.

“I realized that there needed to be a bigger commitment on everyone’s part to protect the water, the land, the climate, and indigenous people’s rights. And my piece was going to be divestment,” says Fielder.

When she made the decision to work with Mazaska Talks full-time, she also made the decision to leave home. Since June, Fielder has been on the road organizing and educating supporters on how they can get their cities to pass legislation. She’s recently traveled to states like Minnesota, Seattle, North and South Dakota.

“We’re trying to stop taxpayer dollars from going toward pipelines that promote climate change and cultural genocide. Our main tactic is cutting off the flow of money and giving consumers the power to use smaller banks like credit unions or public banks,” explains Fielder.

Though there’s currently only one public bank in the US (that would be the Bank of North Dakota, in case you were wondering!), cities such as Seattle, San Francisco, and Santa Fe are conducting studies on how they may be held more accountable for the investments they make. The idea is that if enough individuals move their money elsewhere, Wall Street banks will feel the financial pressure to pull their investment from pipelines.

The three major pipelines in question are Trans Mountain, Line 3, and Keystone XL. Each is perceived as a threat to the indigenous communities they pass through, due to the risk of oil spills and an influx of “man camps.” Therefore, the tribal culture is faced with the responsibility to protect their land and water, as well as each other. Unfortunately, construction sites and oil fields also mean an increase of drug use, crime, and violence, specifically against women. Which may be why many of them are leading the resistance against it.

Fielder believes it isn’t a coincidence that women have been the backbone of the #NoDAPL movement. She’s worked alongside Tara Houska, a tribal rights attorney, Michelle Cook, a human rights lawyer, and LaDonna Brave Bull Allard, a historian and activist.

“We are only as strong as our indigenous women and when they don’t feel safe, the whole community is in danger,” says Fielder. “Mother Earth is feminine and it’s definitely our duty to make that heard and do what we can to bring the elements back into balance.”

As a young indigenous woman, Fielder could list the number of stereotypes stacked up against her. But none of that intimidates her or stops her from doing her work.

“If bankers don’t take seriously our collective call to divest or face the public about the human rights abuse, they’re only hurting themselves and they have bigger forces to reckon with.”

Tell us what you think of Fielder’s activism @BritandCo!

From Your Site Articles
Natalie Zisa
Natalie Zisa is a freelance writer based in New York City. When she's not writing about inspiring women, she's pursuing dance professionally. Otherwise, you can find her searching for free fitness classes, lip syncing to her favorite Italian music, and enjoying her mom's homemade pizza. If she could interview one person, it would be Chelsea Handler.
Ladies First
Empowerment
Ladies First