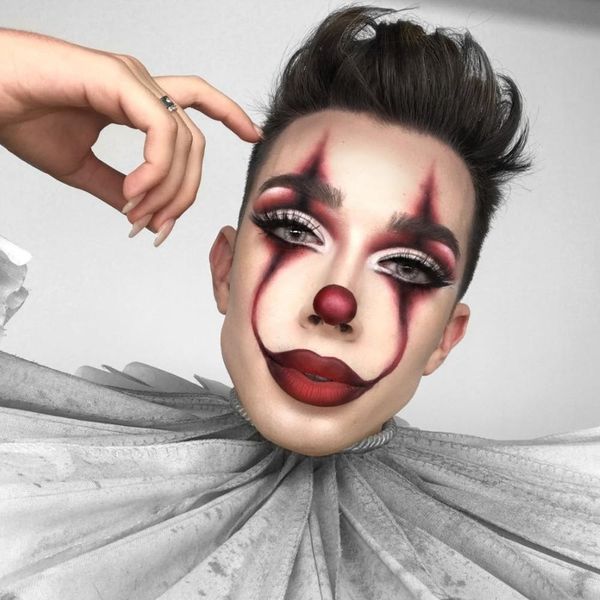 Last year, James Charles became CoverGirl’s first male spokesperson. Since then, he’s come under fire for insensitive past remarks, and the makeup artist’s latest tweets and a makeup tutorial have landed him in hot water again.

In case you missed how this whole sitch started, it all began when Charles originally went to see It. He wrote in a (since-deleted) Twitter post, “Ok five minutes in and IT is already awful stay tuned for updates.”

Why are you on your phone in the movie theater? Rule 1. https://t.co/Z2rm2phkbI

Finn Wolfhard, star of the movie (and Mike from Stranger Things) clapped back, asking why he was on his phone in the movie theater in the first place.

to address all drama regarding my comments on the "IT" movie pic.twitter.com/EtkNG474U3

Charles later apologized to the star on Twitter and even in a video (that was inexplicably filmed in the back of an Uber), explaining that while the movie was well made, it wasn’t his cup of tea.

So naturally, when he announced he’d be doing a Pennywise tutorial, people were a little confused. But as he captioned the vid, “You don’t have to like a movie to do makeup from it. ;)”

One of the film’s stars Wyatt Oleff subtweeted Charles, writing “When you decide to exploit a movie that you hate for money & attention cause why not.”

@jamescharles JAMES DO NOT MAKE ANOTHER UBER APOLOGY VIDEO. I DO NOT DESERVE THIS MANY GOOD THINGS.

Fellow YouTuber Shane Dawson then responded to Oleff’s tweet including James Charles’ handle, “JAMES DO NOT MAKE ANOTHER UBER APOLOGY VIDEO. I DO NOT DESERVE THIS MANY GOOD THINGS.”

But Charles assured Dawson he wasn’t planning on saying he was sorry again, saying, “I’m not apologizing for doing a tutorial my followers asked for I promise sister.”

I get that and it's totally fine. Just making a joke here on my end.

Oleff then backtracked on his subtweet, saying he intended it to only be a joke.

to result in me getting dragged left and right once again. I have a ton of respect for all of you guys but this is uncalled for.

But Charles was having none of it. He said, “It’s not funny though?” He accused Oleff of knowing that the tweet was going to result in the YouTuber “getting dragged left and right once again.”

Guys, @jamescharles is just doing his job. His fans asked for the tutorial so he gave it. We're human, we make mistakes. Don't be a jerk.

Oleff stepped up and apologized, even asking people to quit talking trash.

When Charles responded to the apology with his customary “thank you sister,” Oleff corrected him, saying, “brother** but ok.”

mmm but stop tho

Charles claimed, “We’re all sisters down here,” even including a red balloon emoji, but Nicholas Hamilton (who plays Henry Bowers in the movie) thought it had gone far enough and ended it all with an “mmm but stop tho.”

MY FACE IS BURNING FROM ALL THIS IT TWITTER TEA! pic.twitter.com/bkYvPGz2VS

Meanwhile, the rest of the Twitterverse watched the entire exchange like…

What do you think of the Pennywise situation? Tell us @BritandCo!

Shea Lignitz
Shea can be found in the nearest bookstore or brewery, exploring the great outdoors, or blasting Led Zeppelin. She grew up in the cold and rain of Northern California's redwoods but is currently wandering around Texas.
Controversy
Beauty News
Controversy Halloween