Jennifer Lawrence and Liam Hemsworth Got Tattoos Together 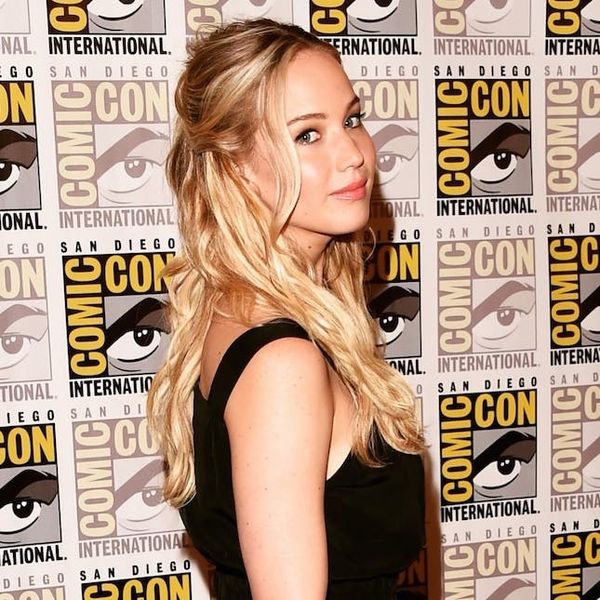 There’s a general consensus that tattoos are great when they carry lots of meaning. When you see someone’s ink, you always want to know the story behind it — but while some stories are personal, for others, it’s can be more of a group activity. Jennifer Lawrence was at Comic-Con in San Diego with the rest of her Hunger Games castmates when she did an interviewfor HitFix where she told the story behind the tiny tattoo on her right hand. In the video, Jen shows off her body ink — a small, “scar-colored… watered down rebellion” (her pun, not ours!).

So the story goes, she was hanging out with Liam Hemsworth and his fam at a tattoo parlor where the Hemsworth clan was getting inked up. Not wanting to be left out, Jennifer also got a tattoo of the scientific symbol for water… that the artist messed up (the “2” in “H2O” is above the letter and not below). Whoops! But proving she is the chillest person alive, Jennifer plans on leaving it that way. Why water, you ask? “Well, I’m always gonna need to be hydrated,” she explained.

Why Josh Hutcherson didn’t get in on his castmates’ BFF tattoos, we’re not sure.

Aside from starring the last of The Hunger Games franchise Mockingjay Part 2 (due out in November!) J. Law has been an extremely busy lady. She’s starring in David O. Russell’s latest flick Joy, which is already garnering lots of Oscar-buzz. We can totally picture her onstage, grasping her next statuette, all with a tattoo mistake on her hand.

The takeaway for all of us? Be sure to Google what you’re getting before you get inked. And, just like the salon, maybe it’s best to go in with a pic of exactly what you want. Check out her interview below.

What do you think of J. Lawr’s new tattoo? Should she get it fixed or keep it? Tell us in the comments below!

Kimberly Wang
Kimberly Wang writes about all things pop culture, tech, style, and beauty. She's a Bay Area transplant and has an MFA in Creative Writing from Columbia University. On a sunny New York day, you can find her hanging out with her mini schnauzer Isabelle Jellybean on a blanket in Central Park.
Fashion