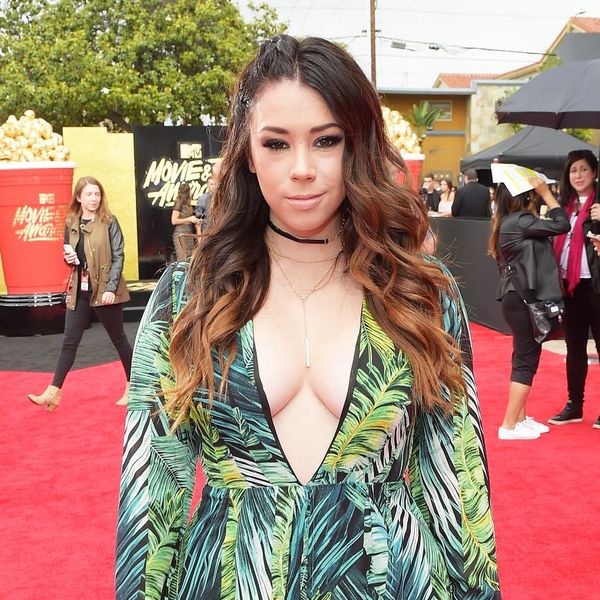 It’s been 17 years — 17 years! — since we got our first jaw-dropping look at Jennifer Lopez in the insanely revealing Versace dress (you know, the one that launched Google Images) at the 2000 Grammy Awards. Well, nearly two decades later, another star was seemingly inspired by Lopez’s timeless style and gave us major déjà vu on last night’s MTV Movie & TV Awards carpet.

Jillian Rose Reed, who stars in the MTV series Awkward, channeled J.Lo to the max in a green gown with a super deep V and a center slit opening. While Reed’s dress wasn’t cut quite so far to her naval and featured some more modest boy shorts underneath than Lopez’s blue hotpants, the similarities between the two were uncanny, right down to their palm-tree prints. Another major difference: the price. Lopez’s Versace comes with a designer price tag — some have estimated that it was $15,000 back in 2000. Reed’s, however, rings in at under $40. Her Fashion Nova Las Islas Dress rings in at just $38.

Reed also switched things up a bit in the shoe department: Where Lopez went for a pair of silvery peep-toe pumps, Reed grunged it up a bit, opting for moss green stiletto booties instead.

Which version of the dress do you like better: J. Lo’s or Jillian’s? Tell us over @BritandCo.