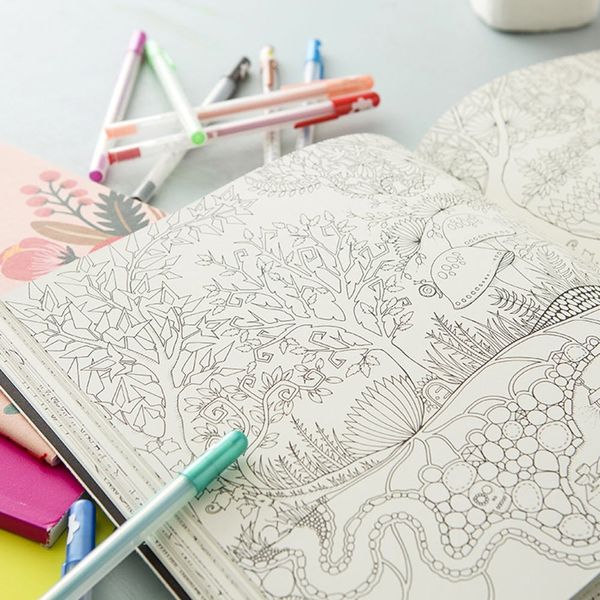 Coloring books are having a moment — and it’s mostly thanks to UK-based illustrator, Johanna Basford. Basford is the creative force behind the intricate and magical illustrations found in both Secret Garden and more recently, Enchanted Forest. Both books seem to have sparked something in adults that the illustrator and her publishing house weren’t expecting — can relate, they definitely had an effect on me when I colored in the book every night for a week. Secret Garden, which was released in 2013, has sold over a million copies and Enchanted Forest (released February 17) sold 226,000 copies in just a month. Due to unexpectedly high demand, both books have been back ordered for some time, but now Basford is coming at you this Friday with not one, but two bits of good news.

About a week ago Basford shared on her blog that a new batch of printed books have started hitting warehouses. She also shared that two more additional print runs have been ordered in an attempt to keep the flow of books moving. As a thank you for being patient, Basford posted three pages from Enchanted Forest on her site that you can print and start coloring while you wait for your copy to arrive.

Now for the most exciting news: Penguin Random House has announced that they’ve signed a new deal with Basford for two more coloring books. The first to be released will be titled, Lost Ocean: An Underwater Adventure & Coloring Book. The press release announcing the new book explains, “readers will meet shoals of exotic fish, curious octopi, and delicately penned seahorses.” Lost Ocean is scheduled to hit shelves on October 27 of this year.

If you’re looking for a copy to keep you entertained over the holidays we suggest you keep a close eye on any pre-order options that might arise. You know we’ll be on it ;) The theme for the second new book has yet to be announced. Johanna, if you’re listening, we’re thinking an outer space adventure or a coloring journey around the world would be all kinds of awesome.

What theme would you suggest for Basford’s fourth book? Share you ideas with us in the comments below.