Jane the Virgin’s Justin Baldoni on That Finale Shocker, Fatherhood, and Breaking Down Gender Stereotypes 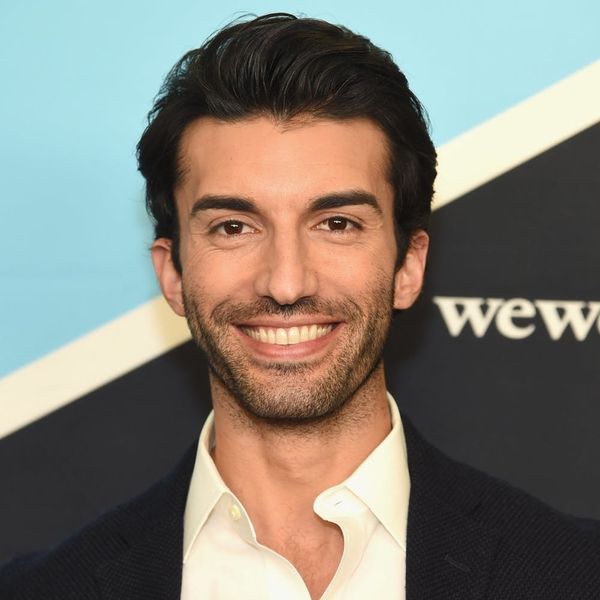 Justin Baldoni has a lot on his plate right now. In addition to his starring role as Rafael on Jane the Virgin, he’s working on his own talk show, Man Enough; giving viral TED Talks on masculinity; and filming an upcoming movie — all while juggling the joys and challenges of life as a dad to two young kids, Maiya and Maxwell, whom he shares with wife Emily Baldoni.

Ahead, he gives us the scoop on that season 4 finale shocker, his thoughts on breaking down gender stereotypes, and what he’s doing to give his children their best chance at a happy, healthy future.

Brit + Co: We obviously have to talk about that wild Jane the Virgin finale. You probably can’t say much, but how long have you known about that twist, and what was your reaction when you found out?

Justin Baldoni: I found out with the rest of the cast, and my reaction was very similar to the fans’ reaction. I mean, I had a sneaking suspicion. Things were getting too good with Rafael and Jane, and nothing can ever be that good. And I remembered how good things got with Michael and Jane. And I think [showrunner] Jennie [Snyder Urman] did a great job of kind of laying these Easter eggs and kind of preparing the audience, if they were really paying attention to the details.

But you know, before Michael passed away, things were great. [He and Jane] were happy. And Jane and Rafael were getting very, very happy, and the show’s not over yet. So I knew something had to happen — either I was going to die, or he was going to come back. And I was hoping he was going to come back. And he did, which is fantastic. I just can’t tell anybody what form he’s come back in. I know there’s a lot of speculation. But it’s great. Brett’s one of my closest friends, and I just adore him as a human being and I think he brings a really cool element to our show and to the cast. He’s just a fun, free-spirited, goofball alien that I just love having around.

B+C: We’re Team Jane, first and foremost, but in terms of the love triangle, do you want Jane and Rafael to be endgame?

JB: Of course! Of course I want Jane and Rafael to be endgame. But at the same time, I can relate to both characters, and I can put myself in Michael’s shoes. Like, how heartbreaking would that be to be about to marry this girl and then have her artificially inseminated with this guy’s sperm? And at the same time, I can also understand and empathize with Rafael. Here he is, out of left field this happens, and it’s his only chance of having a baby, and it just happens to be this girl who rocks his world and shows him another way of living life. You know, he’s gone on a really big journey these last four seasons, and I’m excited to see what happens next.

B+C: Switching gears for a minute, let’s talk about your partnership with the National Peanut Board. You’re doing a video series with Maxwell based on the new guidelines about introducing peanut foods into kids’ diets to prevent an allergy. How did that come about?

JB: Well, we first heard about the LEAP study, which I thought was really interesting. And, you know, I think as parents, we’re always trying to figure out what’s the latest research and what are things we can do that could be great for our children and set them up for success. I grew up in a family where my sister had a lot of allergies to food. She’s pretty much allergic to everything, except peanuts, which is interesting. And I had a lot of friends growing up that had peanut allergies. And I’ve seen how crippling it can be, and how hard it can be, especially because, as we were growing up, there just wasn’t a lot of education or research about food and allergies in general.

So, growing up with all of that, Emily and I have been really cognizant about trying to just make sure that we’re giving Maxwell the best shot at a healthy life. And when we heard about this research … we thought, as long as it’s safe, we should give it a go. So we called our pediatrician, he validated the research and said it was a good idea, and we decided to do it. And now Maxwell is loving it. It was the first food he had outside of his mother’s breast milk, and it’s kind of like this little treat we give him a few times a week. And now we know it’s one less thing he’ll have to worry about throughout his life.

(Note: While the Baldonis chose peanuts as a first food in consultation with their doctor, the ACAAI recommends that peanuts be introduced after other solid foods. Parents should consult with their doctors about any concerns they have about food allergies.)

B+C: Why was it important for you to share this journey with people?

JB: To much is given, much is asked. And I’ve been really blessed. For some reason, I have this platform, and I try to use it in a way where I’m always really honest and talking about my struggles, and also my victories, and talking about the things that I believe in and promoting equality or healthy masculinity or parenting, and talking about my adoration for my kids and all these types of things. And for whatever reason, people have been drawn to what I have to say. So, if that’s the case, Emily and I have always discussed and talked about making sure that we’re always using our platform to be of service. … We try to find and identify partnerships that we believe can also be beneficial to other people. … This was one that we felt drawn to, because I do believe at the end of the day it can save lives.

(You can find more information about the new peanut introduction guidelines at PreventPeanutAllergies.org.)

B+C: You mentioned using your platform to do good. At Brit + Co, we try to use our platform to empower our readers. How do you hope to empower your kids, and especially your daughter, as they grow up? And on the subject of healthy masculinity, what do you want to teach your son?

JB: I grew up in the Bahá’í faith, and in the Bahá’í faith, we’re taught that the equality of women and men is paramount to the future success and well-being of the world. So for me, equality is — it’s in my bones. It’s in the foundation of who I am as a person because it stems from my faith. So growing up as a man in this world today, I think it’s kind of incumbent upon all of us men to make sure that we are advocating and, through our actions, being true allies to women.

As an example, calling my son “buddy” and my daughter “sweetheart,” I realized, “Oh, what am I doing there? I’m perpetuating this idea that he’s my tough little buddy and she’s my little sweetheart.” So I’ve actively decided to switch. I call my son my sweet boy — oh, my kind boy, oh, my sweet boy. And I play around with my daughter a little bit more, and I talk to her about how brave and how strong and how tough she is, and I ask her to show me her muscles. And with my son, I’m already starting to kind of do the opposite.

B+C: That’s a good segue into your show Man Enough, which covers topics including body image and male vulnerability. What else is coming up?