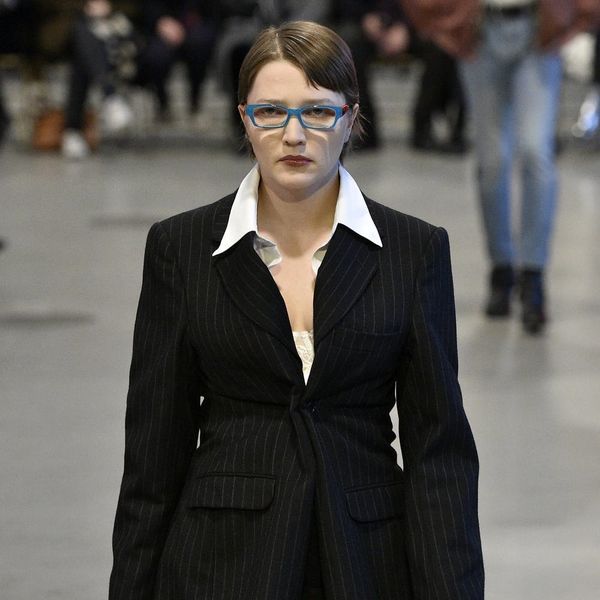 It’s rare that runway designers would hire models who are “everyday people.” That wasn’t the case at a recent Paris Fashion Week show, when streetwear collective Vetements (pronounced vet-MAHN) included every size, shape and creed, from senior citizens to teenagers and men who could double for your dad’s accountant, on their runway. While the effect could have been a fashion don’t, the Kardashian-favored brand pulled it off flawlessly.

The brand’s Fall 2017 men’s and women’s collection show took place at Paris’s contemporary art hub, Centre Georges Pompidou, earlier this week. The theme of the show was “stereotypes,” and it consisted of everything from slouchy shirts, too-long belts, puffer coats, blazers and more.

There was even the brand’s first ever bridal look, which features layers upon layers of long tulle, delicate floral embroidery and frilly veil. Models were stereotypically dressed to personify a range of identities, like Miss Webcam, Stoner and Bouncer.

So, who’s behind this subversive approach, anyway? (And could we, maybe, audition for your next show?) Vetements is a Parisian fashion collective led by Demna Gvasalia, who took over as Balenciaga’s creative director after Alexander Wang. Gvasalia leads the pack of renegade designers and is typically the public face of the collective, but get this — the rest of the members are totally anonymous!

In terms of famous followers, Kourtney, Kendall and Kim have all been spotted wearing the brand. In fact, Kim and her daughter North wore matching custom Vetements outfits in NYC back in September.

And yesterday, for her return stateside after Paris Fashion Week, Kendall opted for a Vetement x Champion Sweatshirt ($990) and Trackpants ($790) combo. Sure, it’s menswear, but hey, these boundaries were made to be broken.

Are you feeling Vetement’s new approach to fashion shows? Tweet us what you think @BritandCo!