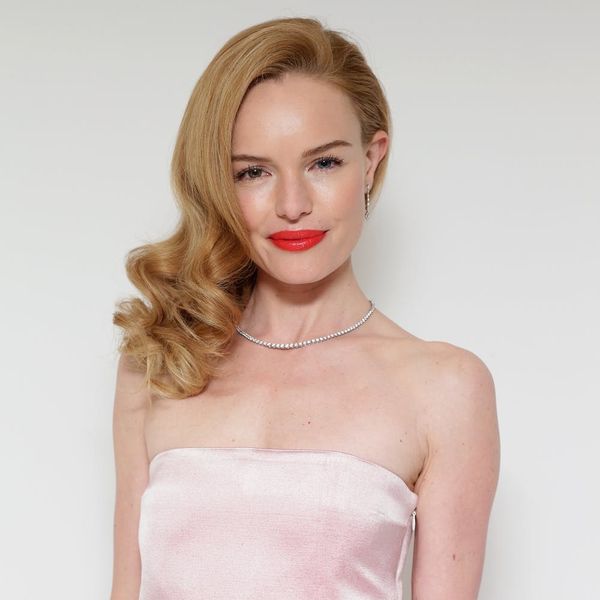 Ever since Kate Bosworth burst onto the scene with her starring role in Blue Crush, she has become known for her exquisite beauty and especially her gorgeous complexion. You’ll be surprised to know that the routine keeping her looking fresh-faced and dewy is NOT costing her thousands of dollars per week, nor requires her to use some tricky scientific formula that involves machinery and a cabinet full of chemicals. Her skincare routine is actually, in fact, surprisingly simple.

At an event for the launch of Aczone Gel 7.5 percent, a topical acne treatment (that’s right, Bosworth gets the occasional zit), she explained less is more when it comes to her skincare.

With her busy travel and work schedule — she currently is filming season two of the television series The Art of More in Montreal — she says all that stress can wreak havoc on her complexion. “There are so many inconsistent variables in our life, whether it’s travel or stress or exhaustion, diet, hormones, etc… these are just the myriad of things we cannot control,” she said. To combat the effects of an inconsistent schedule, Kate’s daily skin routine consists of waking up nice and early, working out, then cleansing her skin and applying a moisturizer and “always sunscreen.” Yup. That’s it.

“I’m pretty minimal in terms of what I use in the morning; though the things I use, I make sure that they’re effective for me,” she explained. “And then in the evening, again I’ll cleanse, and then I’ll apply the Aczone right after cleansing and right before moisturizer…and an eye cream, and that’s essentially it. Less is more. You want to find the things that are effective for you.”

Of course, Kate admits that it isn’t just what she puts on her face that keeps it looking so healthy. “It is a combination of what I put in my body and what I put on my body,” she said. “Particularly when I’m working and want to feel my best and my sharpest I’ll stay away from anything that doesn’t help with that. So sugar, wheat, dairy — all the things we really like, but that make me quite tired! And you can see those showing up in your skin,” she said.

But in case you’re convinced that Kate never strays from her guilt-free diet, don’t worry: She lets herself cut loose a bit when she isn’t working 16 and 17 hours a day. “When I have some time off I have the cheat days,” she admitted. “It’s important, because you have to have fun and enjoy it. Those will be the days that I’ll get a burger with my husband or truffles at Momofuku.”

In sum: Less is more, plus the occasional truffle. Sounds good to us.

What do you think about Kate Bosworth’s skincare routine? Tell us @BritandCo!

Meredith Lepore
Meredith is a freelance writer/editor who writes for Levo League, Bustle, Refinery 29, Instyle.com as well as magazines including Marie Claire, SELF, Women's Health and Cosmopolitan. Before going freelance she was Editor in Chief of the women's career site The Grindstone. She earned her Masters in Magazine, Newspaper and Online Journalism from the Newhouse School at Syracuse University. Meredith resides in New York full time and enjoys SoulCycle, jogging and playing with her Yorkshire Terrier Otis, who also loves SoulCycle.
Beauty News