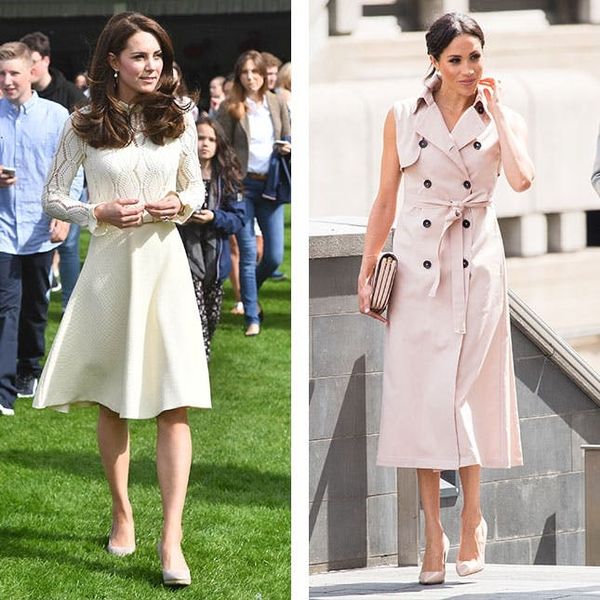 Who better to turn to for polished and elegant outfit ideas than Kate Middleton and Meghan Markle? We already check out their daily looks to inspire our everyday wardrobes, but it's their recent pastel and neutral ensembles that have been catching our eye for Easter. Swipe through for 11 festive getups we’re stealing from the Duchess of Cambridge and Duchess of Sussex for our Easter Sunday celebrations.
Middleton went for a patterned Kate Spade New York design and Gianvito Rossi pumps on October 10, 2016, at an event for World Mental Health Day. (Photo via Max Mumby/Getty)
A drapey coat like Markle’s Mackage option complemented her Victoria Beckham cream shirt, green skirt by Greta Constantine, and Manolo Blahnik pumps in Northern Ireland on March 23, 2018. (Photo via Samir Hussein/Getty)
The Duchess of Cambridge chose a sweet Prada dress for a visit to The Sunken Garden at Kensington Palace on August 30, 2017. (Photo via Samir Hussein/Getty)
At The Nelson Mandela Centenary Exhibition in London on July 17, 2018, Markle opted for a NONIE sleeveless trench dress and Dior pumps. (Photo via Samir Hussein/Getty)
Middleton tested out a pale yellow See by Chloé frock at a garden party at Buckingham Palace on May 17, 2017. (Photo via Andrew Parsons/Getty)
The Duchess of Sussex donned a knee-length Goat dress with sheer sleeves and a coordinating Philip Treacy hat for the Prince of Whales’ 70th Birthday Patronage Celebration on May 22, 2018. (Photo via Mark Cuthbert/Getty)
An Orla Kiely stunner worked flawlessly on Middleton for the Charities Forum Event she attended at Paddington Station on October 16, 2017. (Photo via Max Mumby/Getty)
Markle opted for the classic look in a Karen Gee sheath, Stuart Weitzman pumps, and a Martin Grant topper on her Australian Tour in October 2018. (Photo via Paul Edwards - Pool/Getty)
While celebrating the 50th anniversary of the Investiture of the Prince of Wales at Buckingham Palace on March 5, 2019, Middleton stepped out in a mint green dress by her own private dressmaker. (Photo via DOMINIC LIPINSKI/AFP/Getty)
The Duchess of Sussex visited the Royal Variety Charity's Brinsworth House on December 18, 2018 in Twickenham, England rocking a floral Brock Collection dress, a Soia & Kyo coat, Aquazzura heels, and a Wilbur & Gussie silk clutch. (Photo via Max Mumby/Getty)
For an outing at The National Theatre on January 30, 2019, Markle wore a Brandon Maxwell dress and blazer with coordinating heels and a clutch. (Photo via Karwai Tang/Getty)

Bobby Schuessler
Bobby Schuessler is a contributing fashion writer at Brit + Co and has contributed to Who What Wear, Refinery29, Lucky, Glamour, Out, Nordstrom, and Barneys New York. When he's not writing about style and shopping, you can find him catching up on the latest Housewives franchise and sipping his go-to drink, a vodka martini with a splash of cranberry and a twist.
Kate Middleton
Celeb Style
Kate Middleton Kate Middleton Style Meghan Markle Style Royal Family Royal Style