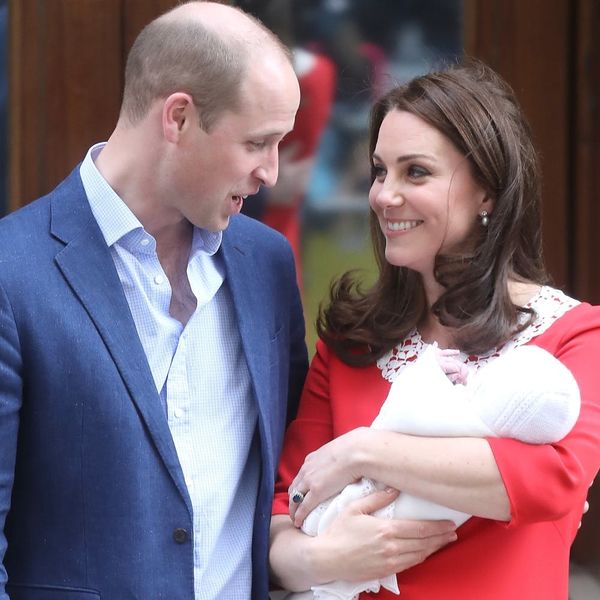 After giving birth to her third child in April, Kate Middleton has been enjoying maternity leave as she settles in to life as a mom of three. She has made a few stylish appearances, notably at her brother-in-law Prince Harry’s royal wedding to Meghan Markle and the Trooping the Colour in June, but we’ve been patiently waiting to see what Middleton would choose for Prince Louis’ christening. In true Duchess of Cambridge fashion, she was both predictable and surprising.

To celebrate the christening of baby Louis on July 9, Middleton chose a cream-colored Alexander McQueen dress. It’s somewhat tradition for the duchess as she wore McQueen for the christenings of both Prince George, 4, and Princess Charlotte, 3, as well as for her iconic royal wedding dress.

Middleton added an elaborate cream hat with floral detailing by Jane Taylor and coordinating cream pumps and pearl earrings. But it’s her deep neckline and exaggerated shoulders that make this look one of her best ever.

For Princess Charlotte’s baptism back in 2015, the Duchess of Cambridge wore a similar cream-colored shift, a look she duplicated several times again afterwards, most notably for Harry and Meghan’s royal wedding in May. She chose McQueen for Prince George’s christening in 2013 as well, opting for a soft yellow ruffled look to baptize her first child.

Her new sister-in-law chose a surprising color choice for her christening debut, while both Prince William and Prince Harry coordinated in navy suits with bold blue ties.

What do you think of Kate’s classic cream frock? Sound off over @BritandCo.

Arielle Tschinkel
Arielle Tschinkel is a pop culture junkie who went to NYU because the Olsen twins went to NYU (really). She is a freelance writer whose work has also been featured on HelloGiggles, Refinery29, SheKnows, Bustle, Hollywood.com, and many others; and she's living her dream one Britney Spears GIF at a time. Follow her on Twitter @mrstschinkel or visit her website at arielletschinkel.com.
Royal Baby
Celeb Style
Royal Baby Royal Family
More From Celeb Style