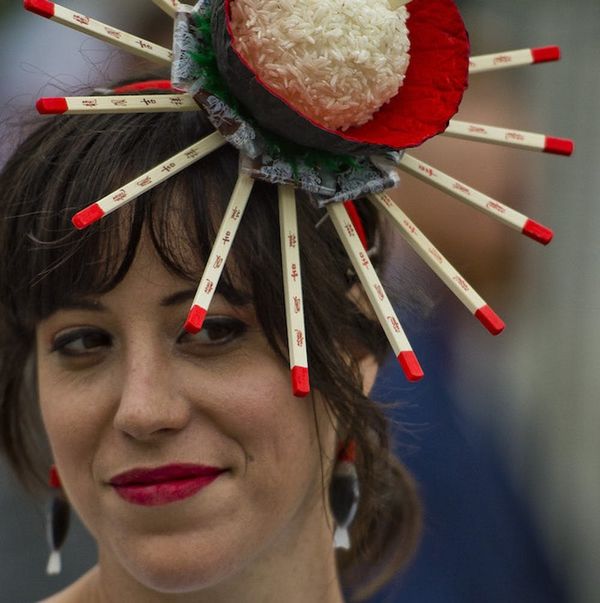 Yesterday’s Kentucky Derby may have seen some rain, but even Mother Nature herself couldn’t put a damper on derby style. Now that we’ve seen all the festive looks celebs like Mira Sorvino, Aisha Tyler, and Tara Lipinksi paraded out for the event, we’re focusing our attention on the real stars of the show: the hats! Scroll through to view all the best toppers spotted on the grounds at Churchill Downs in Louisville.
Feathered Fantasy: This pink masterpiece, complete with feathers, floral embellishments, and a circular frame, was our favorite of the entire derby. (Photo via Dia Dipasupil/Getty)
Rice-Tastic: Rice bowl, anyone? This young woman had us craving sushi with her chopsticked topper. (Photo via Scott Serio/Eclipse Sportswire/Getty)
Kaleidoscope of Color Copious tubes of colored netting attached to a floppy straw base made for one heck of a hat for this derby-goer. (Photo via Scott Serio/Eclipse Sportswire/Getty)
Full of Secrets We can’t quite tell where this creation of horseshoes, trophies, mini sombreros, and other trinkets ends and its wearer begins! (Photo via Stephen J. Cohen/Getty Images)
Plumage Galore: Long, structural plumage gave an interesting shape to this attendee’s headwear. (Photo via Stephen J. Cohen/Getty)
Fashion Meets Function: The bright floral decoration of this creative number balanced nicely against its beer-serving functionality. (Photo via Stephen J. Cohen/Getty)
Flower power: Simple-yet-striking was this brilliant floral design with oversized blooms and eye-catching colors. (Photo via Stephen J. Cohen/Getty)
Sunny Skies: Rain or shine, this woman was covered in her large bucket-style yellow hat. (Photo via Eric Patterson/Eclipse Sportswire/Getty)
Double Agent This fella also came prepared, busting out a hat that could double as an umbrella when rain started to fall. (Photo via Jeffrey Brown/Icon Sportswire/Getty)
Fit for a King: Johnny Weir stood out from the pack, opting for a Kerin Rose Gold crown over a traditional fascinator. (Photo via Dia Dipasupil/Getty)
(Photo via Scott Serio/Eclipse Sportswire/Getty)
Bigger Is Better: This young woman threw her hat (pun intended) in the ring for the derby’s largest headpiece. (Photo by Fernanda Calfat/FilmMagic)
Colorful Plumes: Peacocks had nothing on this multi-hued work of art. (Photo via Sean M. Haffey/Getty Images)

Which hat is your fave? Cast your vote over @BritandCo.

Which hat is your fave? Cast your vote over @BritandCo.

Nicole Briese
Nicole is the weekend editor for Brit + Co who loves bringing you all the latest buzz. When she's not busy typing away into the wee hours, you can usually find her canoodling with her fur babies, rooting around in a bookstore, or rocking out at a concert of some sort (Guns N' Roses forever!). Check out all her latest musings and past work at nicolebjean.com.
Hats
Style News
Hats Style
More From Style News