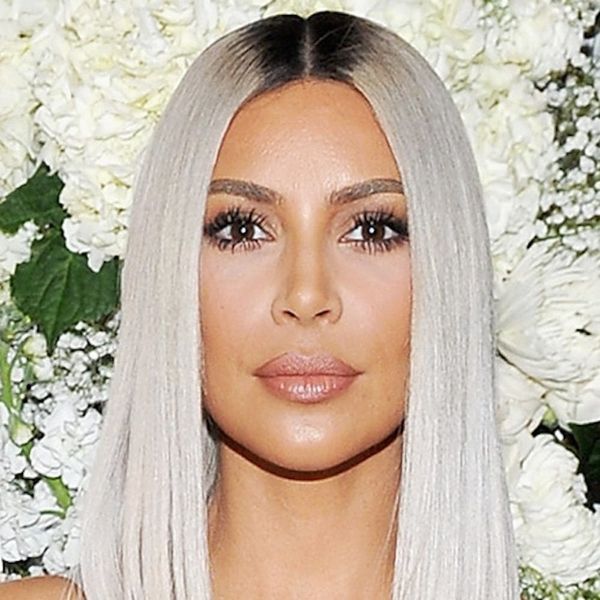 Kim Kardashian West is having a blue Christmas — literally! The soon-to-be mother of three debuted a whole lot more than her family Christmas card this weekend, stepping out with a brand new, ice-blue ‘do that Frozen’s Queen Elsa herself would approve of.

The 38-year-old’s stylist, Chris Appleton, showed off his client’s new look over on Instagram with a pointed snowflake emoji, saying, “Guys, let’s talk about how fire @kimkardashian looks!”

The shot featured the reality star with a brand new frosty-colored coif, which she took care to match to her ensemble, which consisted of elastic-waist pants, a bralette, and an oversized coat.

The edgy shade marks a huge transformation for the Keeping Up With the Kardashians star, who only recently made the switch from her natural raven locks to a jaw-dropping silvery blonde.

Spent the last few days bleaching my roots (we do it in stages so it doesn't break off). OMG 13 hours & still going. This blonde is very high maintenance. Love you @ChrisAppleton1 but getting over this.

Her lighter locks come at a price, however, as she recently revealed on Twitter, writing, “Spent the last few days bleaching my roots (we do it in stages so it doesn’t break off). OMG 13 hours and still going. This blonde is very high-maintenance. Love you @ChrisAppleton1 but getting over this.”

While the blue likely won’t be much easier, as she’d still need to bleach her roots to get such to such a pastel hue, it’s definitely fun, for however long it lasts!

What do you think of Kim’s blue-tiful new look? Share with us over @BritandCo.

Nicole Briese
Nicole is the weekend editor for Brit + Co who loves bringing you all the latest buzz. When she's not busy typing away into the wee hours, you can usually find her canoodling with her fur babies, rooting around in a bookstore, or rocking out at a concert of some sort (Guns N' Roses forever!). Check out all her latest musings and past work at nicolebjean.com.
Celebrity Beauty
Hair
Celebrity Beauty Celebrity Hair Hair Color hair dye Kardashians
More From Hair