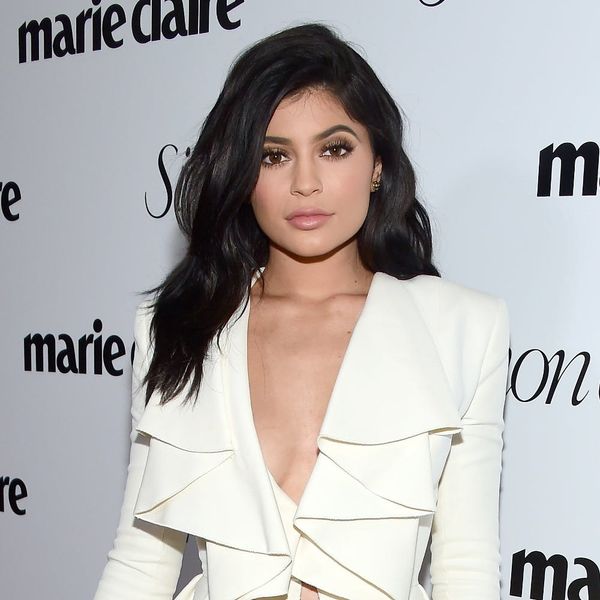 It may be the summer of the wavy lob for Khloé Kardashian and Kendall Jenner (not to mention Victoria Beckham, Carrie Underwood and Maisie Williams), but Kylie Jenner has never been one to be afraid of striking out on her own. Whether slaying super straight, sleek black locks or one of the many colors she’s known for trying out temporarily, Kylie definitely has no fear when it comes to making bold moves with her hair. And now, as everyone else is chopping their length and opting for summery waves, Kylie has instead gone for a mod-like bob that is beyond fabulous.

Kylie’s been having a busy summer so far, lounging by her pool, appearing alongside her equally famous gal pals as they hit up the hottest events around town and reportedly hooking up with on-again-off-again bae, Tyga. All the while, she’s been capturing selfies showing off long, dark locks.

But now it’s all about the short hair. Capturing the process on Snapchat for her ever-voyeuristic fans, the process included first removing Kylie’s stellar extensions before molding the perfect cut. Giving views from the front, back and side, it was clear throughout that this was a look that the younger Jenner would totally slay.

The end result? A perfectly coiffed bob that is totally on-point for those sunny California days by the pool or happening Hollywood parties.

It’s not the first (and surely not the last) time Kylie has shown off shorter hair; she wore a similar style to this year’s Met Gala, even tucking the left side behind her ear in the same way. But if this is the look that Kylie opts for whenever she needs to take a break from the extensions, then girl has one fantastic in-the-meantime style.

Do you think Kylie looks better with long hair or this short bob? Tweet us @BritandCo!

Desiree O
Desirée O is a ‘Professional Bohemian’ who loves anything and everything related to the arts, entertainment, and pop culture. She ADORES being a ‘Newsy’ for Brit + Co, covering all of the latest tidbits of awesomeness that you want to read about. When she’s not writing, she’s either making messy art, going on long adventurous walks with her camera, or poking around over at bohemianizm (http://www.bohemianizm.com/). You can find out about Desirée O and her work at http://DesireeO.com/ or follow her on Twitter @DesireeO.
Celebrity Style
Celebrity News
Celebrity Style
More From Celebrity News